Real Madrid's Croat midfielder Luka Modric, 36, is open to the idea of linking up with Manchester City when he becomes a free agent next summer. (SuperDeporte - in Spanish)

Newcastle are in a race with Roma to sign Hoffenheim's Austrian midfielder Florian Grillitsch, 26, in January. (Sun)

Bayern Munich and Barcelona are both interested in signing French defender Boubacar Kamara, 22, from Marseille. (Footmercato's Santi Aouna on Twitter)

Arsenal have again been named as one of the clubs wanting to sign Raheem Sterling in January. England winger Sterling, 26, has expressed his desire to leave Manchester City for more first-team football. (Transfer Window Podcast, via Express)

Fulham are making a big push for Angers midfielder Angelo Fulgini, 25, and could meet the £18m price for the Ivory Coast-born player. (Sun)

What lies ahead for Rangnick at Old Trafford?

Manchester City are said to have no intention of selling Spanish striker Ferran Torres, 21, for less than 70m euros (£59m). (Marca - in Spanish)

If Torres moves to Barcelona, it could open the door for RB Leipzig's 23-year-old Spanish midfielder Dani Olmo, 23, to make a switch to Etihad Stadium. (El Nacional - in Catalan)

Southampton are interested in signing Blackburn Rovers and Chile striker Ben Brereton Diaz. Sevilla have been leading the race to sign the 22-year-old so far. (Sun) 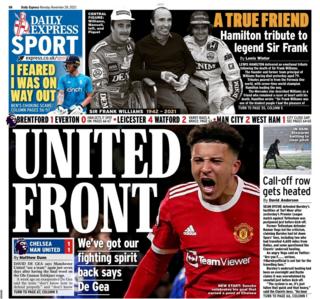