Norway striker Erling Braut Haaland's preferred destination if he leaves Borussia Dortmund next year is Real Madrid, although the 21-year-old has yet to make a decision on his future. (Goal)

Newcastle United are leading the chase to sign France winger Ousmane Dembele, with Manchester United also interested in the 24-year-old whose contract with Barcelona runs out next summer. (Mundo Deportivo - in Spanish)

Leeds United and England midfielder Kalvin Phillips, 25, will reject a move to rivals Manchester United next summer to remain at Elland Road. (Star)

Manchester United are close to appointing Ralf Rangnick as interim manager until the end of the season and the German will be involved in the process of choosing his permanent successor at Old Trafford. (Star)

Manchester United will move for Ajax boss Erik ten Hag if they fail to bring in Paris St-Germain boss Mauricio Pochettino as their new manager in the summer. (Mail)

Manchester City forward Ferran Torres is a target for Barcelona and the Nou Camp club have agreed a deal with the 21-year-old Spain international but have yet to come to an arrangement with the Premier League club. (Marca)

Aston Villa will prioritise signing a centre-back and defensive midfielder in January as manager Steven Gerrard looks to strengthen his side. (Football Insider)

Tottenham boss Antonio Conte, whose side suffered an embarrassing loss to NS Mura in the Europa Conference League, says he is making "evaluations" about his players before speaking with the club. (Mirror)

Fulham's Serbia striker Aleksandar Mitrovic, 27, has been lined up for a dream move to Juventus. (Tuttosport, via the Sun) 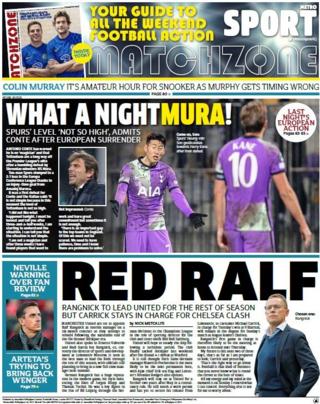