Fiorentina striker Dusan Vlahovic is likely to turn down a move to Arsenal in January because the 21-year-old Serbia international is waiting for other offers. (Football Italia)

It is 'almost impossible' former Real Madrid coach Zinedine Zidane would take over as manager of Manchester United if the Old Trafford side dismiss Ole Gunnar Solskjaer. (AS - in Spanish)

Leicester boss Brendan Rodgers is, however, willing to replace Solskjaer at United, although the 48-year-old would prefer to wait until the end of the season. (Caught Offside)

Portugal playmaker Bruno Fernandes, 27, is one of the senior Manchester United players who feel they are not getting enough direction from Solskjaer and his coaching staff, while international team-mate Cristiano Ronaldo, 36, has been alarmed by the drop in standards at Old Trafford since he left to join Real Madrid in 2009. (Mail)

Belgium boss Roberto Martinez is also in the running to take over at Villa. (Times - subscription required)

Why Man Utd are sticking with manager Old Gunnar Solskjaer

Wolves boss Bruno Lage says Adama Traore's contract situation at the club would not stop him picking the Spain winger for the Molineux side. The 25-year-old has 18 months left on his current deal. (Mail)

Wolves are the club who are most interested in Lille and Portugal midfielder Renato Sanches and they could make a move for the 24-year-old in January. (Fichajes.net)

Spain defender Sergio Ramos is not planning to leave Paris St-Germain, according to the 35-year-old's brother and agent Rene. The centre-back joined the French club on a free transfer in the summer after leaving Real Madrid but has yet to play for them because of an injury. (El Mundo, via Goal)

Crystal Palace are hoping to beat Napoli to the signing of 25-year-old Fulham and Cameroon midfielder Andre-Frank Zambo Anguissa, who has starred on loan for the Italian side this season. (Sun) 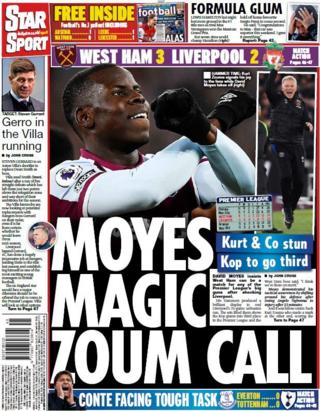