Barcelona forward Ousmane Dembele, is open to a move to Newcastle United when his contract runs out at the end of the season. The France international, 24, joined the Catalan club in a £117m deal in 2017. (Goal)

Newcastle held an interview with former Roma manager Paulo Fonseca on Wednesday as the 48-year-old Portuguese emerges as a leading candidate to replace Steve Bruce. (Mail)

Fonseca was first approached by representatives of Newcastle's new owners in the summer and they have now reopened talks with him. (Telegraph - subscription required)

Real Madrid manager Carlo Ancelotti wants the La Liga club to bring Spain defender Sergio Reguilon back to the club by activating a buy-back clause in the deal which saw the Bernabeu outfit sell the 24-year-old to Tottenham. (El Nacional, via Mirror)

Manchester United boss Ole Gunnar Solskjaer called his players to an emergency meeting on Monday after the 4-2 defeat by Leicester City, with his side responding by coming back from 2-0 down to beat Atalanta in the Champions League on Wednesday. (Times - subscription required)

Brighton are looking at Clermont's Guinea striker Mohamed Bayo, 23, who is rated at £10m by the French Ligue 1 club and has been likened to Chelsea's Romelu Lukaku. (Argus)

Portugal midfielder Bruno Fernandes, 27, threatened to push through a transfer request after he heard Manchester United were one of 12 clubs that signed up to the proposed European Super League. (The Athletic)

Sheffield United are still interested in signing Barcelona's 22-year-old Spanish winger Alex Collado after failing to tie up a move in the summer. (Mundo Deportivo via Sport Witness) 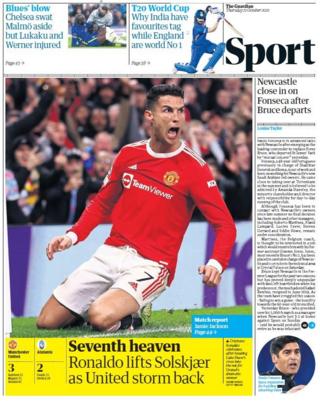