Chelsea are willing to make England midfielder Mason Mount one of their top earners as the club prepare to open contract talks with the 22-year-old. (Goal)

Spain forward Ansu Fati, 18, is close to signing a new long-term contract with Barcelona which will include the same 1bn euro (£846m) release clause as club and international team-mate Pedri, 18. (Fabrizio Romano via Twitter)

Atletico Madrid and England right-back Kieran Trippier, 31, who was heavily linked with a move to Manchester United in the summer, has said he would "love" to play in the Premier League again. (Mirror)

United boss Ole Gunnar Solskjaer will look to clear out at least five players from his squad when the transfer window opens in January. (Sun)

Liverpool, Borussia Dortmund or RB Leipzig will have to pay between 30m and 40m euros to sign RB Salzburg and Germany striker Karim Adeyemi, 19. (ORF - in German)

Newcastle United's new owners have yet to make contact with manager Steve Bruce after the Magpies' home defeat to Tottenham Hotspur on Sunday. (Star)

The list of candidates to replace Bruce at Newcastle United has narrowed to Eddie Howe, Paulo Fonseca and Lucien Favre, who each held initial talks with the club last week. (90 Min)

Netherlands defender Matthijs de Ligt, 22, is unhappy with his role at Juventus, leading his agent Mino Raiola to hold talks with Barcelona about a possible move. (Sport - in Spanish)

Leicester City manager Brendan Rodgers has praised 24-year-old midfielder Youri Tielemans as the Foxes look to extend the Belgium international's contract, which runs out at the end of next season. (Mail)

FC Dallas and United States striker Ricardo Pepi has alerted top European clubs including Liverpool and Bayern Munich by handing in a transfer request - but the 18-year-old has already agreed personal terms with Wolfsburg. (CBS Sport)

Aston Villa will need to move quickly to sign River Plate's Julian Alvarez as Serie A side AC Milan are also interested in the 21-year-old Argentina forward. (Calciomercato - in Italian)

Newcastle United and Leeds United will miss out on Blackburn Rovers' English midfielder Joe Rothwell as the 26-year-old has chosen to sign for Rangers instead. (TEAMtalk)

West Ham United are keeping tabs on Barcelona goalkeeper Neto, 32, who is free to leave the Nou Camp in a January loan deal as long as the club who sign him agree to buy the Brazilian in the summer. (Sport - in Spanish)

Manchester United manager Ole Gunnar Solskjaer says the club need to decide before Christmas whether to keep Ivory Coast international Amad Diallo, 19, at the club or send him out on loan in January. (Football Italia) 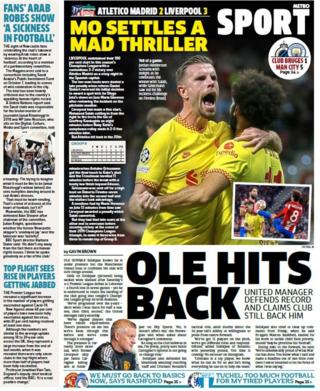