Barcelona are unlikely to pursue Manchester United's Paul Pogba when the France midfielder's contract ends next summer as they cannot afford the 28-year-old's wages. (AS)

Paris St-Germain will target either Bayern Munich and Poland striker Robert Lewandowski, 33, or Borussia Dortmund and Norway forward Erling Braut Haaland, 21, in 2022 as a replacement for France attacker Kylian Mbappe. The 22-year-old is expected to join Real Madrid.(Le 10 Sport)

Liverpool sporting director Michael Edwards is a target for Real Madrid to help the Spanish club with their transfers. (Sun)

'It is time to ask the question: Is Solskjaer up to the job?'

Aston Villa are monitoring Bologna left-back Aaron Hickey but the 19-year-old Scottish defender is in no rush to leave Italy. (Sun)

Manchester United manager Ole Gunnar Solskjaer will not be sacked despite the Norwegian winning only four of eight Premier League matches this season. (The Athletic) 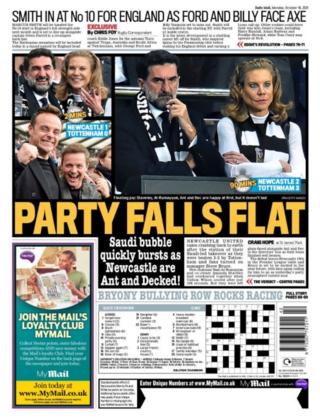