Arsenal are considering a move for Liverpool and England midfielder Alex Oxlade-Chamberlain. The 28-year-old spent six years with the Gunners before moving to Anfield in 2017. (Sun)

Barcelona vice-president Rafael Yuste has played down the chances of the Spanish club being in the market to sign Norway striker Erling Braut Haaland, 21, from Borussia Dortmund next summer. (Mundo Deportivo - in Spanish)

Brazil forward Neymar, 29, has suggested the 2022 World Cup in Qatar could be his last as the Paris St-Germain forward is unsure if he has "the strength of mind to deal with football any more". (DAZN, via Goal)

Barcelona may offload France winger Ousmane Dembele if the 24-year-old does not extend his contract with them and the Spanish club could then try to sign Manchester City and England forward Raheem Sterling, 26, as his replacement. (Sport - in Spanish)

Former RB Leipzig coach Ralf Rangnick is also being looked at by the new Newcastle United hierarchy for the role of sporting director. (Telegraph - subscription required)

Juventus will use Wales midfielder Aaron Ramsey, 30, as a makeweight in their attempt to bring Manchester United and France star Paul Pogba, 28, back to Turin. (Mail)

Ramsey turned down a move to Wolves in the summer, but now plans to leave Juve in January, with Newcastle interested. (Calciomercato - in Italian)

Tottenham are also eyeing 28-year-old Spain striker Alvaro Morata as a possible replacement for England's Harry Kane, 28. Morata is currently on loan at Juventus from Atletico Madrid. (Fichajes - in Spanish)

Liverpool are ready to step up their interest in Wolves and Spain winger Adama Traore, 25. (El Nacional - in Catalan)

Chelsea have agreed a new contract with 25-year-old Denmark defender Andreas Christensen, with the finishing touches being made to the deal before an announcement. (Fabrizio Romano on Twitter)

Italy midfielder Marco Verratti, 28, says he intends to spend the rest of his career at French club Paris St-Germain. (France Info - in French) 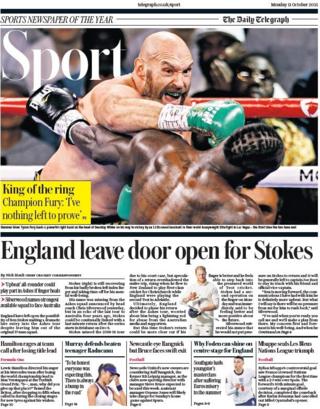