Rangers manager Steven Gerrard and ex-Roma boss Paulo Fonseca are being considered as candidates to take over from under-pressure manager Steve Bruce at Newcastle. (Mirror)

Ex-Bournemouth manager Eddie Howe would also turn down the Magpies as he waits for the Southampton job to become available. (Football Insider)

However, Brazil midfielder Philippe Coutinho, 29, could be heading to Newcastle from Barcelona in January. (Sport - in Spanish)

Former Newcastle and Senegal striker Demba Ba, 36, has made a tongue-in-cheek offer to come out of retirement and play for the club after the takeover. (Star)

Manchester United and Portugal midfielder Bruno Fernandes, 27, has been in contact with Leeds' Brazil midfielder Raphinha, 24, regarding a potential move to Old Trafford. (Mirror)

Germany centre-back Antonio Rudiger is Real Madrid's number one transfer target next year, with the 28-year-old's contract at Chelsea running out in the summer. (ABC - in Spanish)

Barcelona want to sign a midfielder in January and Manchester United's Netherlands international Donny van de Beek and Tottenham's Frenchman Tanguy Ndombele, both 24, are two of four options they are looking at. (Sport - in Spanish)

But manager Ole Gunnar Solskjaer is reluctant to let Van de Beek leave Manchester United in January and will block any moves to sign him. (ESPN)

Manchester United and Portugal forward Cristiano Ronaldo, 36, is reportedly eager for his club to make a move for Juventus and Italy winger Federico Chiesa, 23, who is also said to be a target for Chelsea at the end of the season. (Calciomercato - in Italian)

Argentina striker Sergio Aguero, 33, turned down a move to Juventus before joining Barcelona on a free transfer after leaving Manchester City in the summer. (Sport - in Spanish)

Juventus are looking to sell Wales midfielder Aaron Ramsey, 30, in January, with West Ham and Everton interested. (Calciomercato - in Italian)

Juve are interested in an exchange deal involving Ramsey, with Everton and Brazil midfielder Allan, 30, reportedly open to a Serie A return. (Goal)

Leicester are keen to sign Real Madrid and Spain playmaker Isco, 29, who is surplus to requirements in the Spanish capital. (Fichajes - in Spanish)

Roma are interested in signing Tottenham goalkeeper Josh Oluwayemi. The 20-year-old Italian, who is out of contract next summer, has been in good form for their youth sides and could see a reunion with Roma's ex-Spurs boss Jose Mourinho. (Express) 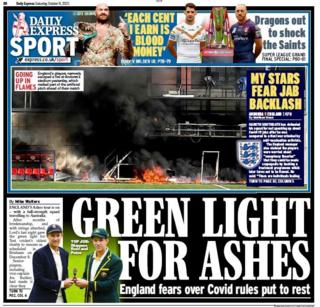