Barcelona and Real Madrid would be among the clubs interested in Leicester City's Youri Tielemans if the Belgium midfielder, 24, is available next summer. (Athletic - subscription required)

West Ham United are working on a deal to sign Juventus' Weston McKennie, 23, with talks having already taken place over the United States midfielder. (Football Insider)

Arsenal have been handed a transfer boost with Ajax cutting off talks over a contract extension for their Cameroon goalkeeper Andre Onana, 25. (Voetbal International - in Dutch)

Former Bournemouth winger Arnaut Danjuma, 24, is being closely monitored by Liverpool after the Netherlands player's impressive start to the season with new club Villarreal. (Voetbal International - in Dutch)

Chelsea and Liverpool are interested in Newcastle and France winger Allan Saint-Maximin, 24. (Calciomercato via Express)

Tottenham Hotspur are tracking Juventus forward Dejan Kulusevski with a view to a January transfer. The 21-year-old Sweden forward is out of favour at the Serie A club. (Sun)

The Champions League newcomers from a disputed 'smugglers' haven'

Tottenham are likely to wait until next summer, rather than January, before trying to sell Dele Alli again, given how much the 25-year-old England midfielder's value has dropped. (Football Insider)

Barcelona have received an offer from a company in Dubai to buy the club's debt of 1.5bn euros (£1.2bn). (8tv via Mirror)

Spurs and France captain Hugo Lloris, 34, has called for patience with manager Nuno Espirito Santo and to give him time to make things work. (Evening Standard)

Arsenal look set to continue their spending in the January transfer window with technical director Edu interested in three more deals as the rebuild continues at the Emirates. (Express)

One player Arsenal boss Mikel Arteta remains interested in is Real Madrid's Marco Asensio. The Gunners had a £34m offer rejected in the summer, but are keen to bring the 25-year-old Spain forward to north London. (Star)

Crystal Palace are keeping tabs on Everton's Tom Davies. The 23-year-old midfielder is contracted until 2023 but is yet to start a match under Rafael Benitez. (Football Insider) 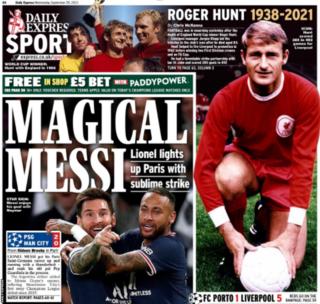 Back page of the Daily Express