Pogba's compatriot Tanguy Ndombele is another midfielder on Manchester United's radar despite the 24-year-old's mixed fortunes since his record £53.8m move to Tottenham Hotspur in 2019. (Calciomercato - in Italian)

While Pogba's future at United remains uncertain, Juventus are not planning to bring the Frenchman back to Turin. Pogba won four Serie A titles in as many seasons at Juve before returning to Old Trafford in 2016. (Tuttomercatoweb - in Italian)

Denmark defender Andreas Christensen, 25, is ready to sign a contract extension at Chelsea worth £120,000 a week after initially being offered a deal with wages lower than the £78,000 a week he currently earns. (Sun)

Juventus and Atletico Madrid are among the clubs keeping tabs on Arsenal and England winger Bukayo Saka, 20. (Calciomercato - in Italian)

Real Madrid are planning a move for Paris St-Germain defender Marquinhos, 27, with the Brazilian under contract at the French club until 2024. (Fichajes - in Spanish)

Fiorentina are trying to tie down Serbia striker Dusan Vlahovic to a new deal after the 28-year-old was linked with a move to Tottenham in the summer. (Gazzetta dello Sport via Sport Witness)

English midfielder Danny Drinkwater admits his Chelsea career has been a "shambles" after the 28-year-old made his debut for Reading in his fourth loan spell away from Stamford Bridge. (Talksport)

Inter Milan are keen to offload Chile forward Alexis Sanchez, with Real Betis and Sevilla having expressed interest in the 32-year-old. (InterLive - in Italian)

Roma are interested in signing Manchester United and Portugal right-back Diogo Dalot, 22, during the January transfer window. (Calciomercato - in Italian)

Brighton midfielder Yves Bissouma, 25, says it was not his time to leave the club in the summer but the Mali international says that his "dream" is to play in the Champions League. (Brighton website, via Metro)

Former Arsenal defender Per Mertesacker, who is now head of their academy, says the club are in a "massive transition" and hopes that first-team manager Mikel Arteta "gets the time that he needs" to improve the London side's fortunes. (Beautiful Game Podcast, via Goal) 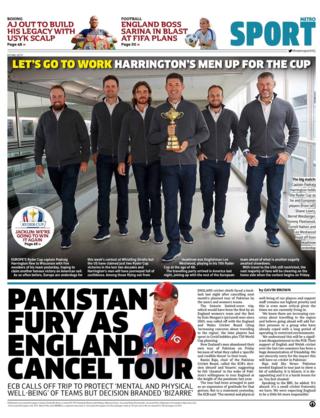