Chelsea's Germany striker Timo Werner, 25, is one of four players being considered by Borussia Dortmund should 21-year-old Norway forward Erling Braut Haaland leave the club next summer. (SportBild - in German)

Germany defender Antonio Rudiger's contract at Chelsea runs out next summer and talks over extending the 28-year-old's deal have stalled. (Times - subscription required)

Barcelona are still hopeful of capturing France midfielder Paul Pogba on a free transfer next summer if the 28-year-old decides against signing a new contract at Manchester United, though they would likely face competition from Paris St-Germain, Juventus and Real Madrid. (Fichajes - in Spanish)

'I didn't have jab and thought I was going to die'

Fiorentina owner Rocco Commisso is unsure whether Serbia's 21-year-old striker Dusan Vlahovic, who has been linked with Manchester City, Atletico Madrid and Juventus, will extend his deal beyond June 2023 with the Italian club. (Calciomercato, via Goal)

A number of Barcelona board members have asked club president Joan Laporta to sack manager Ronald Koeman after Tuesday's 3-0 Champions League defeat at home to Bayern Munich. (AS - in Spanish)

Manchester United midfielder Jesse Lingard, 28, will not be leaving the club according to manager Ole Gunnar Solskjaer. (Sky Sports)

Paul Pogba, 28, is said to be more comfortable with the idea of staying at Manchester United after being impressed by the club's summer signings. (Sky Sports)

Spanish forward Ansu Fati, 18, has moved a step closer to a contract extension at Barcelona after his agent arrived for talks with the La Liga club. (Marca) 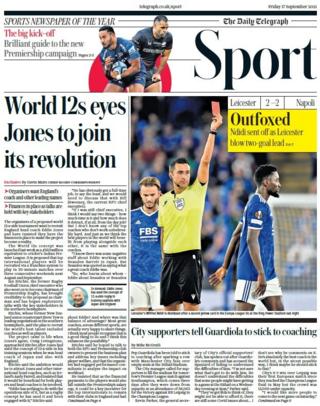