England striker Harry Kane could sign a new deal with Tottenham if a release clause is inserted into his contract. The 28-year-old previously believed he had a gentleman's agreement with chairman Daniel Levy to leave Spurs this summer when Manchester City tried to sign him. (Eurosport)

Paris St-Germain sporting director Leonardo says he does not see Kylian Mbappe leaving the club at the end of the season even though the 22-year-old France striker has yet to agree an extension to his contract, which expires in the summer. (Marca - in Spanish)

Juventus are considering a move for Manchester City's 24-year-old Brazil striker Gabriel Jesus but may face competition from Bayern Munich if their Poland forward Robert Lewandowski, 33, decides to move on. (Calciomercato - in Italian)

Napoli president Aurelio de Laurentiis says he is working on a plan for a pan-European league worth £8.5bn that will have qualification based on merit, unlike the plans for a European Super League that collapsed in April. (Mail)

Belgium midfielder Youri Tielemans says he is "keeping his options open" as he continues to negotiate a new deal with Leicester City. The 24-year-old has been linked with Liverpool, Manchester United, Barcelona and Real Madrid. (Sky Sports)

Tottenham and Atletico Madrid both had bids of at least 90m euros for 24-year-old Argentina striker Lautaro Martinez rejected by Inter Milan in the summer, with Arsenal also being knocked back after making a lower offer. (Gazzetta dello Sport - in Italian)

Arsenal's England forward Bukayo Saka has been approached by a number of clubs, but the Gunners consider the 20-year-old "untouchable". (Here We Go podcast, via Sun)

Chelsea's chances of signing Sevilla's 22-year-old France centre-back Jules Kounde will depend on whether or not 28-year-old Germany defender Antonio Rudiger's contract situation with the European champions is resolved. (Star)

Netherlands midfielder Georginio Wijnaldum, 30, says he "expressed the desire to stay" at Liverpool, but eventually left on a free transfer for Paris St-Germain after being made to feel unwanted by the Reds. (L'Equipe - in French)

Arsenal have not abandoned hope of signing Lyon's France midfielder Houssem Aouar and will target the 23-year-old next summer, but the Gunners will find it difficult to bring him to London unless they qualify for the Champions League. (Todofichajes - in Spanish)

Tottenham are again expected to be among the suitors keen to sign Cagliari's 25-year-old midfielder Nahitan Nandez, who was also wanted by Inter Milan, Napoli, Roma and Fiorentina, when the transfer window reopens in January. The Serie A side are said to be open to sell the Uruguayan in the new year. (Tuttomercatoweb - in Italian)

Juventus and AC Milan could make a move for Real Madrid's 29-year-old Spain midfielder Isco in January. (Calciomercato - in Italian)

Everton are chasing a January move for Aberdeen defender Calvin Ramsay. The Toffees sent a scout to watch the Scottish 18-year-old play against Motherwell over the weekend. (Scottish Sun) 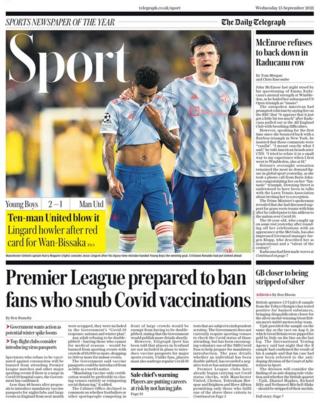