Aston Villa playmaker Grealish, however, is still expected to sign a new deal with the West Midlands club. (Birmingham Mail)

Real Madrid will have to "put up with" Wales forward Gareth Bale for another season as they have not received any offers for the 32-year-old who spent last season on loan at Tottenham. (Mundo Deportivo - in Spanish)

Arsenal have reached an agreement in principle with Brighton to sign the Seagulls' England defender Ben White, 23, on a deal worth about £50m. (The Athletic - subscription required)

Crystal Palace hope efforts made to strengthen the squad under new manager Patrick Vieira will be enough to convince Ivory Coast forward Wilfried Zaha, 28, to remain at the club. (London Evening Standard)

Inter Milan have stepped up efforts to sign Spanish defender Hector Bellerin from Arsenal, but the Italian champions want the 26-year-old on a one-year loan with an option to make it permanent next summer, while the Gunners want about £15m. (Sun)

Portugal forward Cristiano Ronaldo, 36, who has been linked with a return to Manchester United and a move to Paris St-Germain, is set to remain at Juventus with talk of a potential new one-year deal which could include a pay cut. (Gazzetta dello Sport - in Italian)

However, the London club are looking to make a move for Atalanta's Italian goalkeeper Pierluigi Gollini, 26 with a loan deal plus an option to buy, (Sky Italia - in Italian)

Burnley have beaten European champions Chelsea in the race to sign 34-year-old Wales goalkeeper Wayne Hennessey after he was released by Crystal Palace. (Football Insider)

Harry Wilson is among 10 players that Liverpool want to sell and will accept £10m for the 24-year-old Wales forward, who has been linked with Brentford, West Brom and Benfica. (Mirror)

'He is a born winner'

Sassuolo are lining up Liverpool's 25-year-old Serbia midfielder Marko Grujic as a potential replacement if Italy international Manuel Locatelli, 23, who has been linked with a move to Arsenal and Juventus, leaves this summer. (Sky Sports)

Atletico Madrid's 26-year-old Spain midfielder Saul Niguez, who has been linked with Barcelona as part of a swap deal for 30-year-old France forward Antoine Griezmann, has Liverpool and Manchester United interested in him as well. (AS - in Spanish)

Atletico remains frontrunners to sign Griezmann, but Chelsea, Manchester City and Liverpool have been made aware that he has been made available for a "low fee". At least two Premier League clubs have spoken to his agent in the past month. (90min)

Liverpool could be tempted to make a move for Lyon'sFrench midfielder Houssem Aouar, 23, who has been linked with Tottenham, Arsenal and Manchester United. (ESPN)

England defender Kieran Trippier, 30, is optimistic about joining Manchester United from Atletico Madrid this summer and made plans to relocate before Euro 2020 began. (Manchester Evening News)

North Macedonia defender Ezgjan Alioski, 29, is poised to join Galatasaray as a free agent on a three-year deal after turning down two offers of a new contract from Leeds United. (Football Insider) 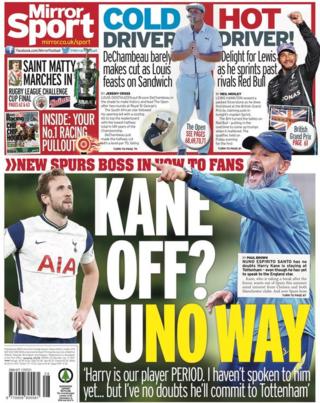