Tottenham could make a move to sign Roma midfielder Lorenzo Pellegrini, 25, but will have to meet his £26m release clause to get the Italy international. (Athletic - subscription required)

Tottenham want 28-year-old England striker Danny Ings but face difficulties as Southampton are reluctant to do business with the north London club. (Standard)

Spanish champions Atletico Madrid have been linked with Manchester United's 28-year-old England midfielder Jesse Lingard, who is also wanted by West Ham where he impressed on loan last season. (90min)

Fiorentina are looking to fend off interest in Dusan Vlahovic from Liverpool and Tottenham by tying the 21-year-old Serbia striker down to a new contract. (Calciomercato - in Italian)

Real Madrid have accepted that 28-year-old France defender Raphael Varane will not sign a new deal and are waiting for an offer from Manchester United. (Goal)

Alternatively, United's deal for Varane is all but done, with Atletico Madrid's 30-year-old England defender Kieran Trippier also on the brink of a move to the Red Devils. (Sun)

Arsenal are set to rival Tottenham in the race to sign France midfielder Houssem Aouar, 23, from Lyon. (Le10Sport - in French)

Juventus will press ahead with their attempts to sign 24-year-old Brazil striker Gabriel Jesus from Manchester City.(Sun)

Tottenham have made a breakthrough in talks with Bologna over a deal for 22-year-old Japan defender Takehiro Tomiyasu and the move is expected to be completed this month. (Football Insider)

Messi to stay at Barca

Everton are set to sign 16-year-old English striker Francis Okoronkwo from Sunderland in a deal worth up to £1m. (Mail) 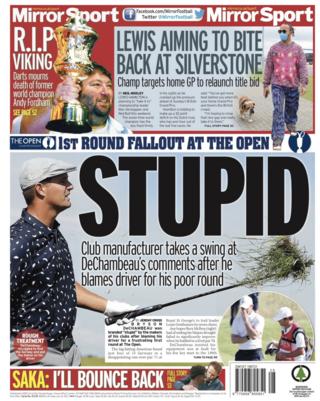