Argentina forward Lionel Messi, 33, has yet to make a decision over whether to stay at Barcelona, with just one week left on his deal at the Spanish club. (Marca)

Manchester City would be willing to wait a year to bring in a striker if they were unable to sign England forward Harry Kane, 27, from Tottenham this summer. (ESPN)

Tottenham are planning talks with former Wolves manager Nuno Espirito Santo about taking over as their new boss, having previously ruled the 47-year-old Portuguese out of contention. (Football Insider)

Real Madrid are set to challenge Arsenal for the signature of Real Sociedad striker Alexander Isak after the 21-year-old Swede's impressive performances at Euro 2020. (AS - in Spanish)

Bayern Munich centre-back Niklas Sule, 25, who has been a target for Chelsea, is in line to extend his contract with the German club. (Sport Bild, via Sun)

Paris St-Germain have made contact with 35-year-old Spain centre-back Sergio Ramos, whose contract with Real Madrid runs out at the end of this month. (Goal)

PSG have agreed a deal with Inter Milan to sign 22-year-old Morocco wing-back Achraf Hakimi from the Serie A side for £59.8m, including bonuses. (ESPN)

English left-back Ryan Bertrand, 31, is set to join Leicester City on a free transfer at the start of July following the end of his contract with Southampton. (Goal)

Liverpool boss Jurgen Klopp has been impressed by Aston Villa and Scotland midfielder John McGinn, but it would take an offer in the region of £45m-50m to lure the 26-year-old away from Villa Park. (The Athletic - subscription required)

Manchester United centre-back Axel Tuanzebe is expected to leave the club on loan this summer, with Premier League and overseas clubs interested in the 23-year-old English defender. (Manchester Evening News) 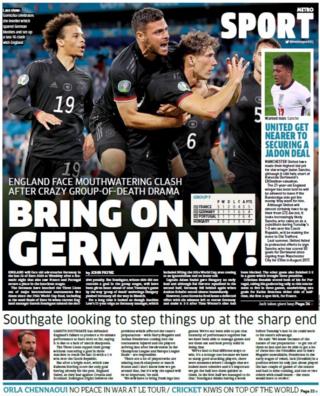