Tottenham chairman Daniel Levy will deny Kane a move to a club in the Champions League and is determined to hold onto the England captain. (Sunday Telegraph - subscription required)

Tottenham's new sporting director Fabio Paratici is keen to bring in ex-Wolves boss Nuno Espirito Santo as the club's new manager but others at the London club want to try to reappoint Mauricio Pochettino, who is in charge at Paris St-Germain. (Talksport)

Manchester United have made a new bid of more than £75m for Borussia Dortmund and England winger Jadon Sancho, 21, after their initial offer of £67m with add-ons was rejected by the German club. (Mail on Sunday)

Manchester United fear France midfielder Paul Pogba, 28, will run down the final year of his contract and leave them for free next summer, with talks over a new deal at a deadlock. (Sunday Mirror)

Real Madrid's big summer signing could be the return of Colombia playmaker James Rodriguez, 29, from Everton. (Sport - in Spanish)

Should home internationals be revived?

Scotland left-back Kieran Tierney, 24, has agreed a new five-year contract with Arsenal, who want English midfielder Emile Smith Rowe, 20, to sign a new deal after turning down a bid from Aston Villa. (Guardian)

Chelsea are willing to offer English midfielder Ruben Loftus-Cheek, 25, to Inter Milan as part of the deal to sign their 22-year-old Morocco wing-back Achraf Hakimi. (Gazzetta dello Sport - in Italian)

Real Madrid are looking to sell Luka Jovic, 23, and his former club Eintracht Frankfurt are interested in re-signing the Serbia forward, if their Portugal striker Andre Silva, 25, leaves - with Manchester United and Chelsea having shown interest. (AS - in Spanish)

Borussia Dortmund and Real Sociedad are working on an agreement to waive the buyback clause in Alexander Isak's contract, so that the Sweden striker, 21, can sign a new deal with the Spanish club. (Sport1 - in German)

Liverpool have completed the signing of Ghanaian forward Abdul Fatawu Issahaku, 17, according to the chairman of his club Steadfast FC. (Sunday Mirror)

Bayern Munich are interested in PSV Eindhoven and Netherlands full-back Denzel Dumfries - but the 25-year-old could prove too expensive. (Sky Sports - in German)

France forward Antoine Griezmann, 30, says he wants to end his career in the MLS after his Barcelona contract expires in 2024. (Sun on Sunday)

Swansea manager Steve Cooper is top of Fulham's list to replace Scott Parker, who is expected to take over as Bournemouth boss. (Sun on Sunday)

West Brom have made contact with former Everton boss Marco Silva as a back-up plan if talks prove to be unsuccessful with Barnsley manager Valerien Ismael. (Football Insider) 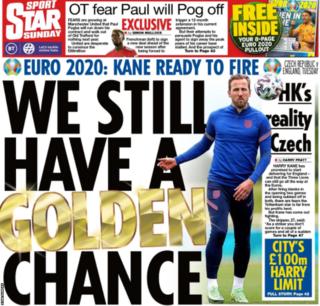