Portugal forward Cristiano Ronaldo, 36, has once again refused to rule out a move away from Juventus before his contract ends next year. He has been linked with his former club Manchester United, with the Italian side hoping to cash in on the veteran player. (Express)

England winger Raheem Sterling, 26, will hold talks with Manchester City after Euro 2020 to discuss his future at the club. (Telegraph)

England winger Jadon Sancho expects to become a Manchester United player, despite Borussia Dortmund rejecting a £67m bid for the 21-year-old. The Bundesliga side are holding out for £77m with add-ons. (Manchester Evening News)

Chelsea are now favourites to sign England and Aston Villa midfielder Jack Grealish this summer as they look to beat both Manchester clubs to the 25-year-old's signature. (Fichajes via Mirror)

Switzerland midfielder Granit Xhaka's transfer from Arsenal to Jose Mourinho's Roma is not expected to be finalised any time soon because the two clubs have reached a 'stalemate' in negotiations for the 28-year-old. (Corriere dello Sport via Express)

Juventus and Wales midfielder Aaron Ramsey looks set for a Premier League return. The 30-year-old has been linked with Crystal Palace, West Ham United and Everton, as well as former club Arsenal. (Calciomercato - in Italian)

Was this the best Euros goal ever?

Newcastle United have added Liverpool defender Nathaniel Phillips to their list of targets, but may have to compete with Burnley for the 24-year-old English centre-back who is unlikely to play regularly when the likes of Virgil van Djik, Joe Gomez and Joel Matip return from injury. (Mail)

Real Madrid centre-back Raphael Varane is set to leave the Spanish giants, with both Manchester United and Paris St-Germain interested. The 28-year-old's preference is the Ligue 1 side, who would need to pay around 60m euros (£51.5m) for the France defender. (El Confidencial, via Caught Offside)

Leicester City's acquisition of French midfielder Boubakary Soumare could finally be completed this week. Wolves and Everton are also admirers of the 22-year-old, who plays for Ligue 1 champions Lille. (Mail)

Everton are interested in Sporting Lisbon midfielder Matheus Nunes, 22. An initial fee of £15m is being considered for the Brazilian, with bonuses that will take the fee up to £17m. (Record, via Daily Star) 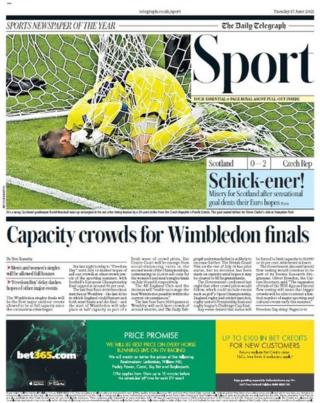 The Daily Telegraph back page