Manchester United expect to announce the signing of Borussia Dortmund and England winger Jadon Sancho after Euro 2020 and have already agreed personal terms with the 21-year-old. (Sun)

United are prepared to bid for Bayern Munich's French winger Kingsley Coman, 24, if Dortmund play hardball over a move for Sancho. (Sport1, via Express)

Juventus are interested in signing Tottenham and England striker Harry Kane, but a major stumbling block will be the price tag Spurs chairman Daniel Levy has set for the 27-year-old, who has indicated he wants to leave the club. (Calciomercato - in Italian)

Pogba, talking before France's European Championship campaign, has refused to rule out a move to Paris St-Germain as speculation about his future continues. (Mirror)

Germany midfielder Ilkay Gundogan, 30, is keen to wait and see if Barcelona are genuinely interested in him before making a decision on his Manchester City future. (Sun)

West Ham manager David Moyes is on the verge of signing a new three-year contract with the club, ending the prospect of a return to Everton. (Telegraph - subscription required)

Tottenham Hotspur are among the clubs interested in giving Sheffield United's English goalkeeper Aaron Ramsdale a chance to stay in the top flight. Wolves are also interested in the 23-year-old. (Mail)

Everton have also made contact with former Lyon boss Rudi Garcia about the vacancy at Goodison Park. (L'Equipe - in French)

Liverpool are preparing to make a move for Lazio's Serbia midfielder Sergej Milinkovic-Savic, with Reds boss Jurgen Klopp identifying the 26-year-old as his top target to replace Netherlands international Georginio Wijnaldum after his move to Paris St-Germain. (Il Messaggero, via Team Talk)

The Match of the Day podcast picks

Everton and Tottenham are both looking to make a move for 23-year-old Uruguay winger Diego Rossi, who is expected to cost about £10m from US Major League Soccer side Los Angeles FC. (Telegraph - subscription required)

Arsenal have been linked with Anderlecht midfielder Albert Sambi Lokonga, with the 21-year-old Belgian also attracting interest from Monaco, Sevilla and Bayer Leverkusen. (Sudinfo - in French)

Fenerbahce are interested in signing Liverpool's 25-year-old left-back Kostas Tsimikas, with the Reds open to letting the Greece international leave on loan. (Fotomac, via Sport Witness)

Fulham's former England Under-19 defender Tosin Adarabioyo, 23, who is wanted by Arsenal and Newcastle, will be able to leave Craven Cottage for £10m this summer because of a release clause in his contract. (Mail)

Barca have already "taken steps" to try to sign Italy midfielder Lorenzo Pellegrini from Roma, but face competition from Liverpool and Atalanta for the 24-year-old's signature. (Mundo Deportivo - in Spanish)

West Bromwich Albion have made contact with former Aberdeen boss Derek McInnes about the managerial vacancy at The Hawthorns after the collapse of talks with David Wagner. (Football Insider)

Barcelona and Atletico Madrid are poised to battle it out for the signature of Napoli's 25-year-old Spanish midfielder Fabian Ruiz, who has rejected two contract extension offers from the Italian club. (AS - in Spanish) 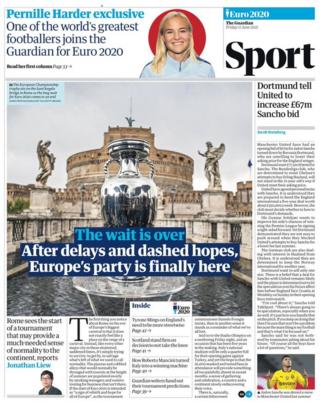