Chelsea want to sign Inter Milan and Morocco right-back Achraf Hakimi. The 22-year-old has been subject of a bid from Paris St-Germain. (Times, subscription required)

If Chelsea sign Hakimi they could then listen to offers for English winger Callum Hudson-Odoi, 20, or Tino Livramento, with Aston Villa interested in the English right-back, 18. (Guardian)

Paris St-Germain are monitoring the situation of France forward Ousmane Dembele, 24, who has a year left on his contract Barcelona. (Marca)

Barcelona are weighing up a move for Manchester City and England winger Raheem Sterling, 26, who is seen as an ideal replacement for Dembele if he does not renew his contract. (Sport)

Inter Miami's managing owner Jorge Mas confirms that he and co-owner David Beckham have had talks with Argentine forward Lionel Messi, 33, about joining the team as part of his playmaker's 10-year contract negotiation with Barcelona. (Miami Herald)

Brazil forward Neymar, 29, made it a condition when he signed his new contract with PSG that they would not sell France forward Kylian Mbappe, 22, this summer. (AS - in Spanish)

Incoming sporting director Fabio Paratici will tell Harry Winks that Tottenham will listen to offers for the English midfielder, 25, this summer. (Football Insider)

Roma are close to completing the signing of Switzerland midfielder Granit Xhaka, 28, from Arsenal. (Corriere dello Sport - in Italian)

RB Leipzig's Austrian midfielder Marcel Sabitzer, 27, who has previously been linked with a move to Tottenham, wants to leave the Bundesliga club and could leave for about £15m in the summer. (Athletic, subscription required)

Burnley have agreed a new contract with manager Sean Dyche, 49, who is set to be backed in the summer transfer window. (90min)

Former Chelsea manager Frank Lampard is back in the frame for the Crystal Palace job after talks with ex-Wolves boss Nuno Espirito Santo collapsed. (Mirror)

West Ham have stepped up efforts to sign Jesse Lingard on a permanent deal from Manchester United after the 28-year-old England midfielder missed out on selection for the European Championship. (Sun)

From sitting on the bench to becoming a scoring machine...

Porto are the front runners to sign Liverpool's Serbian midfielder Marko Grujic after he spent last season on loan at the club. The Portuguese side, however, face competition from Germany and Italy for the 25-year-old signature. (Athletic, subscription required)

Leicester City are up against Wolfsburg and Lyon in attempt to sign Bournemouth's 24-year-old Dutch winger Arnaut Danjuma. (Voetbalzone - in Dutch)

Southampton are close to finalising a deal for Brest's 23-year-old French left-back Romain Perraud - who has previously been linked with Leeds - but an unnamed club may yet hijack the move. (Express)

Spanish midfielder Javi Martinez, 32, is willing to listen to all types of offers as he prepares to leave Bayern Munich. (Mundo Deportivo - in Spanish)

Spanish defender Sergio Ramos, 35, hopes he can recommence contract talks with Real Madrid and is open to a one-year contract extension after previously holding out for a longer deal. (AS) 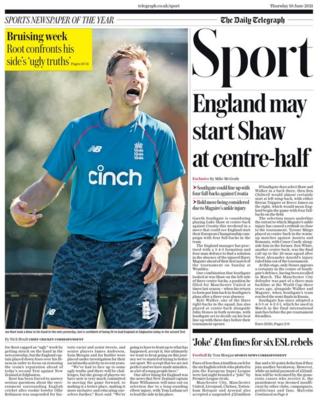