Manchester United have edged closer to agreeing a deal to sign Jadon Sancho from Borussia Dortmund after the asking price for the 21-year-old England winger fell to £80m plus add-ons. (Times, subscription required)

Portugal forward Cristiano Ronaldo, 36, is exploring his options elsewhere despite being in talks with Juventus over his future at the club. (ESPN)

Chelsea have opened talks with Borussia Dortmund over a possible £170m move for Norway striker Erling Braut Haaland, 20, and England forward Tammy Abraham, 23, could be part of the deal. (Mail)

Brighton will hope to hold off interest in England defender Ben White from the likes of Manchester United, Arsenal and Liverpool by putting a £50m valuation on the 23-year-old. (Mail)

Leicester have agreed a £15m transfer in principle with Celtic for French forward Odsonne Edouard, 23. (Sun)

Atalanta have set a £52m asking price for Argentina defender Cristian Romero. The 23-year-old centre-back has been linked with a move to Manchester United. (Tuttosport - in Italian)

Paris St-Germain are closing in on the signing of AC Milan and Italy goalkeeper Gianluigi Donnarumma, 22, on a free transfer. (Sky Italia)

Fulham boss Scott Parker would be tempted to quit the club to become manager at Bournemouth. (Talksport)

West Ham and Aston Villa are keen to sign Burnley striker Chris Wood, while Everton are monitoring the 29-year-old New Zealand international while they await the appointment of a new manager. (Mirror)

Aston Villa are favourites to sign 16-year-old central defender Josh Feeney from Fleetwood in the summer, but they face competition from Manchester United for the England Under-16 captain. (Mail) 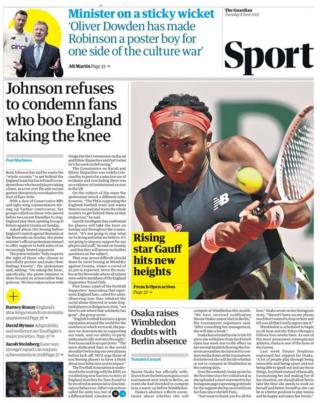