However, Spurs are in talks with Belgium head coach and former Everton and Wigan boss Roberto Martinez, 47, as the search for Jose Mourinho's successor progresses. (Sky Sports)

Inter Milan manager Antonio Conte led the club to this season's Serie A title but the ex-Chelsea boss is to leave the club within the next 48 hours. (La Gazzetta dello Sport, via Metro)

Wolves are prepared to sell Portugal midfielder Ruben Neves for £35m to fund a rebuild for whoever takes over following Nuno Espirito Santo's departure. (The Athletic - subscription required)

Wolves will not be forced into selling 24-year-old Neves, who has been at the club since 2017, but will listen to offers should it allow them to rebuild their squad. (Express & Star)

Brazilian playmaker Philippe Coutinho, 28, will be among 10 players to be transfer listed by Spanish giants Barcelona this summer. (Star)

Barcelona and Manchester City are among the clubs interested in Atalanta's German midfielder Robin Gosens, 26. (Sport)

'More complicated than any other country'

Arsenal's Brazil forward Willian, 32, is keen on a return to Chelsea - less than 12 months after ending a seven-year spell at Stamford Bridge. (Sky Sports)

Villarreal's Spanish defender Pau Torres, 24, has refused to discuss speculation linking him with a move to Manchester United this summer, before Wednesday's Europa League final against the Premier League club. (Metro)

United have agreed a deal to sign Aston Villa's English goalkeeper Tom Heaton, 35, on a free transfer next month. (Express)

Liverpool and England Under-21s defender Rhys Williams, 20, is likely to be loaned out next season despite breaking into the first team in 2020-21. (Star)

Arsenal's Uruguay midfielder Lucas Torreira will decide his future after next month's World Cup qualifiers. The 25-year-old spent the 2020-21 season on loan at Atletico Madrid. (Express)

The Gunners could reignite their interest in Lyon's French midfielder Houssem Aouar, 22. (Mirror)

Roma are interested in signing 24-year-old English winger Demarai Gray, who joined Bayer Leverkusen in January and has a buy-out clause of 2m euros (£1.73m). (Roma Press, via Sky Germany)

France midfielder Eduardo Camavinga wants to join Paris St-Germain and Rennes want 100m euros (£86.6m) for the 18-year-old, whose contract with them runs out next summer. (RMC Sport) 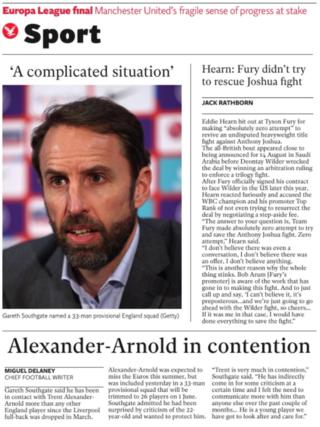