Belgium midfielder Youri Tielemans will hold contract talks with Leicester City at the end of the season. The 24-year-old, who scored the winner for the Foxes in the FA Cup final against Chelsea, has two years left on his current deal. (Mail)

Brazil winger Willian is set to leave Arsenal this summer but the Gunners are yet to receive any bids for the 32-year-old. (Fabrizio Romano, via Mail)

Former Juventus manager Massimiliano Allegri appears to have moved ahead of former Real Madrid striker Raul as the frontrunner to replace Zinedine Zidane as the Spanish club's manager. (Marca)

'A monumental moment that could define Liverpool's season'

Netherlands defender Sven Botman, who was linked with Liverpool in January, says "the Premier League is something special" but the 21-year-old added he is "happy at the moment" at French club Lille. (Athletic - subscription required)

Tottenham defender Toby Alderweireld is a target for Club Bruges but the 32-year-old Belgium international will not make a decision on his future until finding out who will take over from interim Spurs boss Ryan Mason. (Voetbal 24, via Express)

Turkey's 27-year-old midfielder Hakan Calhanoglu, whose contract at AC Milan runs out on 30 June, says his future does not depend on the Italian club reaching the Champions League and that he will discuss his situation with them at the end of the season. (Sky Sport Italia, via Football Italia)

Sassuolo director Giovanni Carnevali says it is "entirely possible" Italy midfielder Manuel Locatelli will stay with the Serie A side for next season, despite the 23-year-old being linked with a number of clubs. (Sky Sport Italia, via Football Italia) 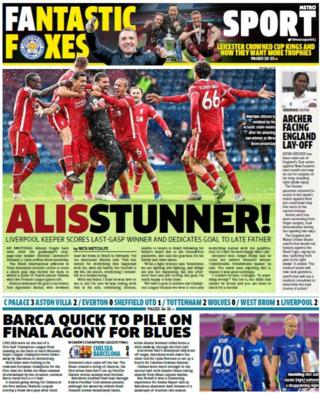