Atletico Madrid manager Diego Simeone is thought to be a big fan of Liverpool midfielder Naby Keita, 26, and is keen to add the Guinea international to his squad this summer. (Fichajes via Star)

Leeds United manager Marcelo Bielsa, whose current deal at the club runs out at the end of the season, is close to agreeing a new contract with the Elland Road side. (Telegraph)

Leicester City are interested in signing Southampton's English left-back Ryan Bertrand. The 31-year-old's contract expires at the end of the season after seven years with the Saints. (Leicester Mercury)

Manchester United are understood to be preparing a £68m bid for Atletico Madrid's Spain midfielder Marcos Llorente, with the La Liga side keen to speed up the 26-year-old's contract talks to keep him at the club. (Mirror)

Italy midfielder Jorginho has played down speculation linking him with a move from Chelsea, with the 29-year-old saying he feels at "home" at the Stamford Bridge club. (Independent)

Italian keeper Gianluigi Buffon, 43, says he has "received offers" to continue playing when he leaves Juventus at the end of the season and he will "take 20 to 25 days to decide" whether to play on or retire. (DAZN, via Goal)

Could Benjamin Mendy, 26, be on his way to Chelsea? Manchester City's France left-back's name has appeared on the list of options on Chelsea's online shop for fans wanting a player's name on the back of their shirts. (Manchester Evening News)

RB Leipzig's France centre-back Dayot Upamecano, 22, who will join fellow Bundesliga side Bayern Munich in a £38m transfer this summer, says he turned down the chance to sign for Manchester United at the age of 17. (Athletic - subscription needed)

Tottenham are reportedly hoping to convince 24-year-old Denmark centre-back Joachim Andersen, who has spent this season on loan at Fulham from French side Lyon, to join them over north London rivals Arsenal. (BT via TeamTalk)

Former Barcelona midfielder Xavi has signed a new contract to continue managing Qatari-based club Al-Sadd until 2023, dealing a blow to Barca president Joan Laporta, who is looking to replace current boss Ronald Koeman with the Spaniard for next season. (Mail)

Leeds United are ahead of AC Milan in the race to sign 26-year-old Udinese midfielder Rodrigo De Paul, but Liverpool are also said to be interested in the Argentina international. (Il Milanista - in Italian)

Wolves' Portugal goalkeeper Rui Patricio, 33, who has just over 12 months left on his contract at Molineux, could be a target for new Roma manger Jose Mourinho. (Calciomercato - in Italian)

Cristiano Ronaldo's mum, Dolores Aveiro, would like her famous son to return to Sporting Lisbon, should the 36-year-old forward leave Juventus in the summer. (Guardian)

Argentina striker Lautaro Martinez, 23, has not signed a new contract with Inter Milan as he waits to see what the club's plans are for the future, says his agent. (Gazzetta dello Sport - in Italian) 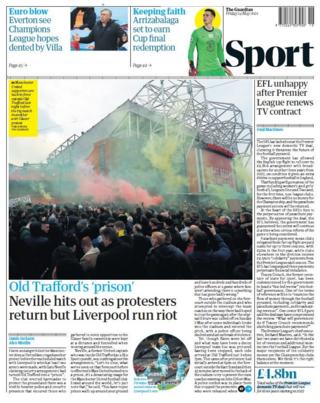