Arsenal are considering a move for French striker Moussa Dembele. The 24-year-old is on loan at Atletico Madrid from Lyon. (Telegraph)

Chelsea are to offer manager Thomas Tuchel a new three-year deal at the end of the season. (Mail)

Barcelona have reached an agreement with Manchester City to sign Spain defender Eric Garcia, 20, on a free transfer. (Goal)

Southampton boss Ralph Hassenhuttl is "positive" the club can keep 28-year-old England striker Danny Ings, who has a year left on his contract with the south coast club. (Mail)

Sheffield United and Norway midfielder Sander Berge, 23, has a release clause of £35m and not the £12m that some reports have mentioned. (YorkshireLive)

Jose Mourinho hopes to reunite with Manchester United and Argentina goalkeeper Sergio Romero, 34, when he takes over as Roma boss. (Express)

Real Madrid have also enquired about Aurier, whose contract at Spurs expires in 2022. (Foot Mercato - in French)

Manchester City's French defender Aymeric Laporte, 26, could switch international allegiance and play for Spain at this summer's Euros. Laporte has represented France at youth level, but has yet to break through to the senior side. (Marca)

Southampton and England left-back Ryan Bertrand, 31, is a target for Arsenal, AC Milan and Monaco. (Goal)

Southampton and Leeds United are interested in signing England international Ainsley Maitland-Niles, who has spent the season on loan at West Brom from Arsenal. The 23-year-old can play in central midfield or at right-back. (Mail)

Everton will allow England winger Theo Walcott to leave this summer. The 32-year-old, who has spent the season on loan at Southampton, is out of contract next month. (Football Insider)

Fulham want manager Scott Parker and Serbia striker Aleksandar Mitrovic to stay at the club despite their relegation from the Premier League. (Sun)

Manchester United are ready to make a £15m bid for FC Nordsjaelland and Ghana winger Kamaldeen Sulemana, 19. However, there are concerns he wouldn't be granted a work permit to play in the UK. (Sun)

Arsenal manager Mikel Arteta has played down speculation linking the club with a move for former Gunners keeper Wojciech Szczesny. The 31-year-old Poland international is currently at Juventus. (Metro) 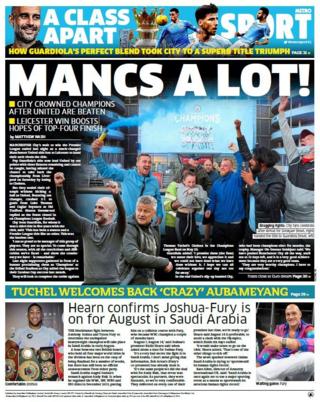