Sancho has decided to return to England this summer and Chelsea, along with Manchester United, are interested in signing him. (Bild, via Star)

Manchester United's priority is to sign Sancho after the club put plans to buy a striker this summer on hold with Uruguay forward Edinson Cavani, 34, signing a new deal. (Times - subscription required)

West Ham's financial uncertainty means they may not be able to turn 28-year-old England midfielder Jesse Lingard's loan from Manchester United into a permanent deal. (Mail)

Germany goalkeeper Bernd Leno, 29, and Spain right-back Hector Bellerin, 26, are among six players Arsenal will put up for sale this summer. (Football London)

The agent of Aston Villa and England midfielder Jack Grealish says there are "many clubs" interested in signing the 25-year-old. (SNTV via Birmingham Mail)

AC Milan want to sign defender Fikayo Tomori, 23, on a permanent deal. The England centre-back is currently on loan at Milan from Chelsea. (Goal)

'The football gods had written it in the stars'

Chris Wilder is on a shortlist of potential new managers at West Bromwich Albion if Sam Allardyce leaves after their relegation from the Premier League. (Sky Sports)

Newcastle United want to sign English winger Joe Willock in a permanent deal from Arsenal this summer, after the 21-year-old impressed on loan. (Talksport)

Wolverhampton Wanderers and Watford are interested in signing Senegal striker Mbaye Diagne. The 29-year-old is currently at West Brom on loan from Galatasaray. (Football Insider)

Aston Villa left-back Neil Taylor is wanted by Championship teams Stoke City and QPR. The Wales defender, 32, is out of contract this summer. (Sun) 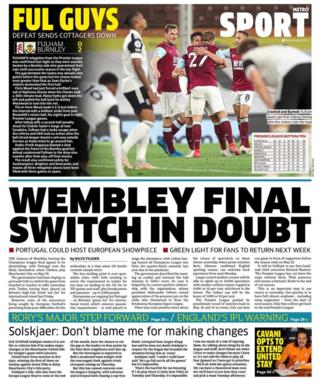