Ajax are set to battle it out with Manchester United for 19-year-old Ghanaian winger Kamaldeen Sulemana, who currently plays with Danish side FC Nordsjaelland. (Mail on Sunday)

Manchester United will offer Uruguayan striker Edison Cavani a £2.5m pay rise to keep the 34-year-old at the club for another year. (Sun on Sunday)

West Ham's Declan Rice has hinted that he could leave the club in search of European football with Manchester United and Chelsea long-term admirers of the 22-year-old English midfielder. (Sunday Mirror)

Tottenham striker Harry Kane is a top target for Chelsea, who "are ready to line up a huge bid" for the 27-year-old if there is a hint the England international could be made available. (Football Insider)

England captain Kane is ready to ask Tottenham chairman Daniel Levy to consider offers for him this summer. (Sun on Sunday)

Manchester United and keen to sign England midfielder Jude Bellingham, 17, from Borussia Dortmund this summer rather than his team-mate Jadon Sancho, 21. (Bild, via Manchester Evening News)

Bellingham, however, is happy at Dortmund, who "definitely will not sell" the teenager after beating United for his signature less than 12 months ago. (Sport 1 journalist Patrick Berger on Twitter)

Borussia Dortmund also do not want to sell Norwegian striker Erling Haaland, 20, and would only consider offers of 180m euros for the 20-year-old. (Marca)

Juventus have no intention of parting with Dutch international defender Matthijs de Ligt with approaches for the 21-year-old from Chelsea and Barcelona already knocked back. (Tuttosport - in Italian)

Arsenal manager Mikel Arteta has called on the club's board to spend big to ensure the Gunners remain among the Premier League's contenders. (Sunday Star)

Meanwhile, the Gunners are keen to tie down highly-rated 18-year-old English winger Kido Taylor-Hart to a new deal in the next month. (Sun on Sunday)

Newcastle United have extended Swiss defender Fabian Schar's contract, with the 29-year-old due to remain at the club until 2022 (Blick via Chronicle Live)

Everton could sign Poland and former Arsenal goalkeeper Wojciech Szczesny from Juventus this summer but Paris St-Germain are also interested in the 31-year-old. (Calciomercato - in Italian)

Sheffield United's 23-year-old Norwegian midfielder Sander Berge, who has been linked with Arsenal, Aston Villa and Everton, could leaves Bramall Lane for £35m because of a relegation clause in his contract. (Yorkshire Live)

Chelsea are keen to tie 19-year-old striker Armando Broja down to a long-term deal at Stamford Bridge after being impressed by the Albania international's season-long loan stint at Vitesse Arnhem, in which he has scored 10 league goals. (Sun on Sunday)

Incoming Roma boss Jose Mourinho could look to bring in 27-year-old Italy striker Andrea Belotti from Torino, with Paris St-Germain's Argentine forward Mauro Icardi is also a target for the Giallorossi. Roma may also still look to keep 35-year-old Bosnia striker Edin Dzeko, who had previously been expected to leave the club in the summer. (Corriere dello Sport - in Italian)

Barcelona remain interested in Ajax's Ryan Gravenberch, 18, having first tried to sign the Dutch midfielder as a 15-year-old. Barca, however, face competition for Gravenberch, who has been linked to a number of clubs including Manchester United and Juventus. (Mundo Deportivo - in Spanish)

Bayern Munich president Herbert Hainer said the German club will "not make any expensive transfers" this summer, which appears to rule them out of a potential move for Inter Milan's 22-year-old Morocco right-back Achraf Hakimi. (Goal)

Liverpool manger Jurgen Klopp has assured Japanese international midfielder Takumi Minamino, 26, who has been on loan at Southampton, that he remains part of the long-term thinking at Anfield. (Goal) 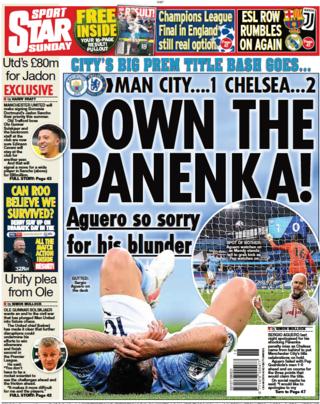