Thomas Tuchel's side have also added Liverpool's Egypt forward Mohamed Salah, 28, to their shortlist as they look to bolster their forward line this summer. (Bild journalist Christian Falk on Twitter)

Brazil forward Neymar, 29, will sign a new four-year contract extension at Paris St-Germain on Saturday, committing him to the club until 2026. (L'Equipe - in French)

Real Madrid have run out of patience with Eden Hazard and will listen to offers for the 30-year-old Belgium forward this summer. (Marca)

Tottenham Hotspur will not consider any offers for England striker Harry Kane, 27, this summer. (Standard)

Leicester City are confident of beating Liverpool and West Ham to the signing of 23-year-old French striker Odsonne Edouard from Celtic. (Teamtalk)

Meanwhile, West Ham have delayed contract talks with manager David Moyes as the club deals with the financial implications of the coronavirus pandemic. (Mail)

Arsenal are backing manager Mikel Arteta following the club's Europa League exit and will provide him with funds for a summer spending spree. (Sun)

Georginio Wijnaldum's agent says the Netherlands midfielder, 30, would be interested in talking to Bayern Munich about a free transfer move when his Liverpool contract expires this summer. (Sport1 - in German)

Arsenal are considering a move for Ajax's Cameroon goalkeeper Andre Onana, although they will wait for the verdict in the 25-year-old's appeal against a doping ban before making a formal offer. (Goal)

Can Rooney keep Derby County in the Championship?

Inter Miami will rival Watford for the free transfer signing of Ashley Young when the 35-year-old former England winger's contract at Inter Milan expires at the end of the season. (Sun)

Wolves, Leicester City, Leeds United and Aston Villa are tracking 16-year-old Fleetwood Town defender Josh Feeney, who has been called up by both England and Scotland at Under-16 level. (Mail) 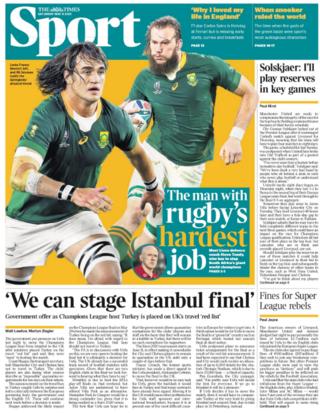