Mourinho hopes to be reunited with Manchester United and Spain goalkeeper David de Gea, 30, when he takes over at Roma. (Todofichajes - in Spanish)

Barcelona have opened talks with representatives of 32-year-old Argentina striker Sergio Aguero, who will leave Manchester City as a free agent in the summer. (Sky Sports)

Manchester City will consider a move for Mali's Bissouma, having backed out of a potential bidding war for West Ham's 22-year-old England midfielder Declan Rice. (Star)

Leeds United boss Marcelo Bielsa wants to keep North Macedonia defender Ezgjan Alioski, 29, but does not know what the future holds after he was linked with a move to Galatasaray. (Yorkshire Evening Post)

Chelsea and Inter Milan are poised to make a move for 31-year-old Bosnia midfielder Miralem Pjanic, who has found opportunities limited at Barcelona since his arrival from Juventus last summer. (Sport)

Former England winger Ashley Young, 35, says it would be difficult to turn down a return to his boyhood club Watford if he does not sign a new contract with Inter Milan at the end of the season. (Sky Sports)

Marseille's France forward Florian Thauvin, 28, has rejected an offer from Crystal Palace and will instead join Mexican side Tigres in the summer. (La Provence - in French)

Juventus and Italy defender Giorgio Chiellini, 36, is on the radar of several Major League Soccer clubs. (Calciomercato - in Italian)

Brentford have been linked with Hibernian and Scotland striker Kevin Nisbet, 24. The Bees are making plans for next season and the potential sale of 25-year-old English forward Ivan Toney, who is wanted by several clubs, including Chelsea and West Ham. (Sun)

Real Madrid players fear manager Zinedine Zidane, 48, is "tired and annoyed" and will walk away from the final year of his contract in the summer. (Goal)

Crystal Palace and Belgium striker Christian Benteke, 30, could seal a free transfer to Fenerbahce, with his contract expiring on June 30. (Sun)

Everton have offered 20-year-old English defender Joe Anderson, who is out of contract in the summer, a new deal amid growing interest from English Football League clubs. (Liverpool Echo) 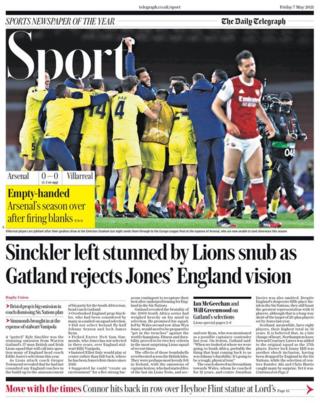