Barcelona are yet to make a contract offer to 33-year-old Argentina playmaker Lionel Messi, whose deal with the Spanish club runs out in the summer. (Marca)

Talks between Barcelona and France forward Ousmane Dembele over a new contract are not progressing, with the 23-year-old's current deal running out in 2022. (Sport - in Spanish)

Alexandre Lacazette says the decision about signing a new contract with Arsenal "is not only on my side", with the 29-year-old France striker's current deal ending in 2022. (Mirror)

Leicester and West Ham are interested in 23-year-old Chelsea and England striker Tammy Abraham, who was left out of the Blues' FA Cup semi-final win over Manchester City. (Guardian)

The idea of Italy striker Moise Kean, 21, returning to Everton following his loan spell at PSG is "difficult to imagine", according to his brother Giovanni. (Tuttosport, via Football Italia)

RB Leipzig coach Julian Nagelsmann has reiterated he has not held talks with Bayern Munich about replacing Hansi Flick as their manager. (Goal)

Poland international and former Arsenal keeper Wojciech Szczesny, 31, will not be leaving Juventus to join Tottenham this summer. (Goal)

AC Milan director Ricky Massara says he expects the club to sign a new deal with Sweden striker Zlatan Ibrahimovic, 39, and is "confident" Italy keeper Gianluigi Donnarumma, 22, and Turkey midfielder Hakan Calhanoglu, 27, will sign new contracts with the Serie A side. (DAZN, via Football Italia) 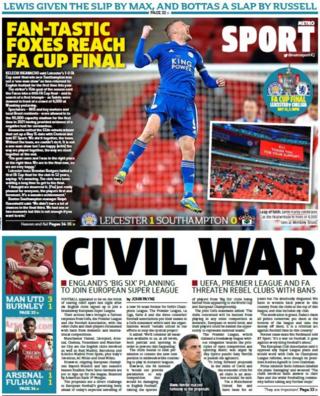