There is "a growing belief" at Tottenham that manager Jose Mourinho will not be at the club next season, with Spurs struggling to secure a Champions League place for the 2021-22 campaign. (Football London)

France midfielder Paul Pogba wants £500,000-a-week to sign a new deal with Manchester United, while Real Madrid, Paris St-Germain and Juventus have also been told of the 28-year-old's wage requirements if they want to sign him. (Star on Sunday)

Chelsea will compete with Manchester United for the signing of Real Madrid and France centre-back Raphael Varane, 27. (Bild journalist Christian Falk on Twitter)

Wolves want to offload Spain winger Adama Traore to help raise funds for new signings and £30m could be enough for a club to sign the 25-year-old. (Football Insider)

Tottenham continue to monitor 22-year-old Brazil right-back Emerson, who is on loan at Real Betis from Barcelona. (Mundo Deportivo - in Spanish)

Liverpool midfielder Georginio Wijnaldum, 30, plans to join Barcelona in the summer because he wants to play alongside Lionel Messi and Netherlands team-mate Memphis Depay. (Sunday Mirror)

England striker Tammy Abraham's future at Chelsea is in doubt after manager Thomas Tuchel left the 23-year-old out of the squad for their FA Cup semi-final win against Manchester City. (Mail on Sunday)

AC Milan have made it clear to Chelsea they plan to take up the option to turn 23-year-old England defender Fikayo Tomori's loan into a permanent move. (Football Insider)

Aston Villa and Crystal Palace are interested in signing 25-year-old Chelsea and England midfielder Ruben Loftus-Cheek, who is on loan at Fulham. (Teamtalk)

Leeds United are targeting a move for 28-year-old Argentina left-back Nicolas Tagliafico, whose contract with Ajax runs until 2023. (Sunday Mirror)

Leeds will also try for a third time to sign Rangers' English winger Ryan Kent, 24, and will offer £15m. (Sun on Sunday)

West Ham are stepping up their pursuit of Sparta Prague striker Adam Hlozek, with the 18-year-old Czech Republic international also attracting interest from other clubs. (90 Min)

France forward Alassane Plea is ready to leave Borussia Monchengladbach, with Arsenal, Leicester and West Ham having previously shown interest in the 28-year-old. (Mail on Sunday)

Newcastle United manager Steve Bruce says he would "love" to keep 21-year-old English midfielder Joe Willock, who is on loan from Arsenal. (Metro)

Manchester United lead the chase for 18-year-old Metz and Senegal midfielder Pape Sarr, but other top European clubs are interested. (Sun on Sunday)

Norwich's 24-year-old Argentine playmaker Emiliano Buendia, who was linked with Arsenal, says he had the chance to leave the Canaries in January but opted to stay and help the Carrow Road club return to the Premier League. (Metro) 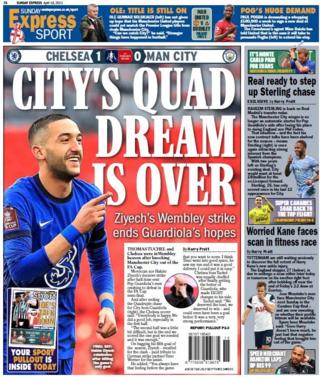