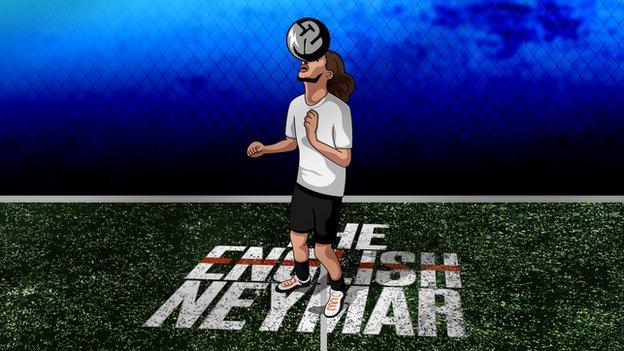 In his teenage years, Tayshan Hayden-Smith was nicknamed 'the English Neymar'. Now, at the age of 24, he has a new moniker - 'the Grenfell guerrilla gardener'.

Hayden-Smith has had trials with several English football teams - including Crystal Palace, Fulham, Newcastle and Watford - and also spent a season in Austria playing for FC Kitzbuhel.

But becoming a dad at 17, losing his mum in his early 20s and the 2017 Grenfell Tower fire have all played a part in him taking a completely different path.

Hayden-Smith began playing football as a three-year-old at Westway pitches, underneath the A40 flyover and just across the road from where he grew up in west London.

"You couldn't detach me from a ball, I always had one at my feet," he tells BBC Sport.

"When I was really small, I had no option but to play on the side of the pitches because they were booked out. So it was a lot of street football, playing wherever I could find a space.

"I had a really beautiful time growing up playing football. It was my way of expressing myself and finding myself."

In the early days, he played for teams - including Westway FC - with philosophies he describes as "keeping the ball and expressing yourself", and Brazilian great Ronaldinho was one of his main inspirations.

His style was also heavily influenced by his coach Kevin Green - an England futsal player and former Chelsea coach who nicknamed him 'the English Neymar'.

"I ended up at left-back because Kevin said I had a good view of the pitch. We'd kick off and I'd go and score immediately."

At 13, Hayden-Smith began playing with development squads, and trialling for academies.

"I probably hold the record for being on trial for the longest time," he laughs. "I spent nearly seven months at Fulham. 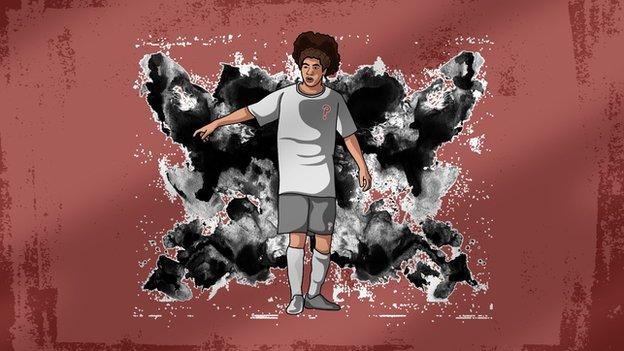 "They assessed my social, tactical, technical, physical and psychological abilities, and I excelled in everything. They said technically I was one of the best players but when it came to physicality they always said 'too short'.

"No matter where I went, I'd have to fill out forms that asked about the size of my parents. I feel like the UK is way behind in terms of philosophy on physicality. In a way that Spain, for example, isn't.

"I'm quite an aggressive player, defensively. That's been built up over time from people trying to tell me: 'You're too short.' I go the extra mile."

After leaving Fulham, Hayden-Smith had trials elsewhere, including at Queens Park Rangers and Watford.

"It was always like: 'We really love you as a player, we think you're great, but not right now.'"

Then he was picked up by Brentford.

"I wanted to make it for my mum and give something back," he says.

"Football is a life-changing opportunity. Mum was a single parent of four and we lived in a council house, so when I signed with Brentford's academy it felt like it was all worth it.

"My mum used to be my biggest fan, shouting and screaming when I was playing. She drove me everywhere and gave me the confidence to enjoy it."

When he was 13, Hayden-Smith's mum was diagnosed with cancer and she became severely ill a year into his time at Brentford.

"I really struggled - academically and with football," he says. "Brentford were so accommodating, but my performance was compromised. I think at 16, they had the option to give me a scholarship and they turned me down."

Hayden-Smith's mum, Nancy, died when he was 23, by which time his life looked very different.

After leaving Brentford, he spent time at Aldershot Town, Newcastle, Crystal Palace and back at Fulham, where he would break his wrist during a game.

After six weeks out, another chance had gone. His next club was AFC Wimbledon, and he loved his time there.

But at 17 he found out he was going to be a dad and decided to take a break - just, as he would later be told by an agent, as he was about to be offered a professional contract.

"It was very unexpected and I had to adapt my life," he says. "My dad was never around and that kind of showed me how not to be. So there was no question in my mind - I would be there for my son."

Within a year, Hayden-Smith was back in football - playing for FC Kitzbuhel in the Austrian fourth tier.

Adjusting to living abroad was made more difficult by racism - including from a landlord he says burst into his apartment in the middle of the night and called him racial slurs. 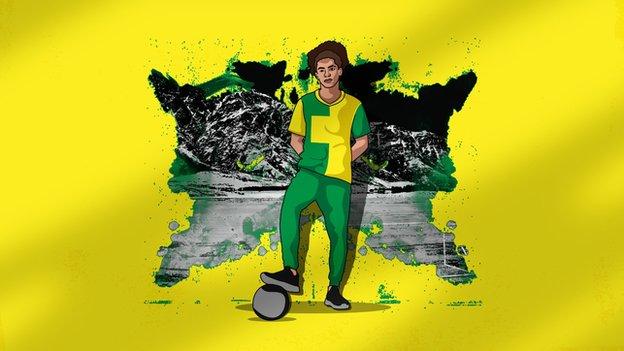 "That massively hindered my experience," he says. "We won the league, and that's a massive achievement, but I didn't really integrate too well.

"There was a period of time where I was staying in my car while moving between apartments because my landlord kicked me out for no reason. I didn't even tell the club - I didn't want to cause any hassle.

"They wanted me to stay out there for another year and I thought that would be amazing, especially if we had another promotion… but then Grenfell happened."

Hayden-Smith grew up right next to Grenfell Tower and often played on a pitch in its shadow.

"That pitch was like my Bernabeu," he says. "I used to train and be like: 'Rah, what if there's a Chelsea scout in Grenfell Tower watching me?'"

He flew home as soon as he heard the news about the fire.

"I was frantically watching the news, trying to get in touch with people I knew," he recalls. "There's no planning for losing 72 people from your community - they're your neighbours."

A public inquiry looking at the circumstances leading up to and surrounding the fire was ordered by former Prime Minister Theresa May and started in September 2017. It is ongoing and hearings are due to resume on Monday. 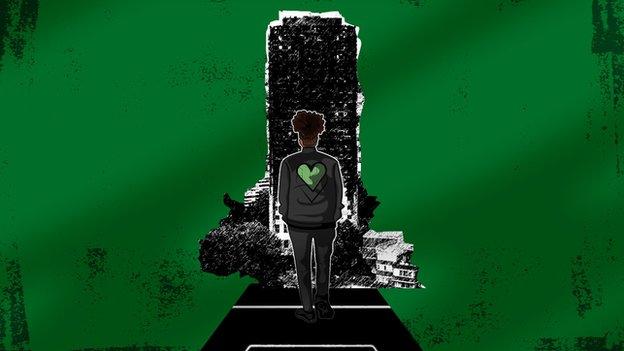 When Hayden-Smith realised the extent of what had happened at Grenfell, he decided to stay with his family, turning down the contract extension in Austria. He doesn't regret it, but always wonders "what might have been".

Football took a back seat, though, and he found a new passion - guerrilla gardening, which he describes as a form of activism.

"That period of time really matured me," he says. "I started to ask questions like 'who am I?' and 'what am I standing for?'

"I remember being so angry at the system, the injustice and the negligence after seeing people from different cultures, diverse communities and immigrants being treated as second-class citizens.

"We experienced losing a community en masse - some people lost children, some lost parents. Whole families were wiped out. There were different layers of trauma among the community and I was trying to figure out how to help.

"I found therapy in gardening. It was a very spontaneous, impulsive thing." 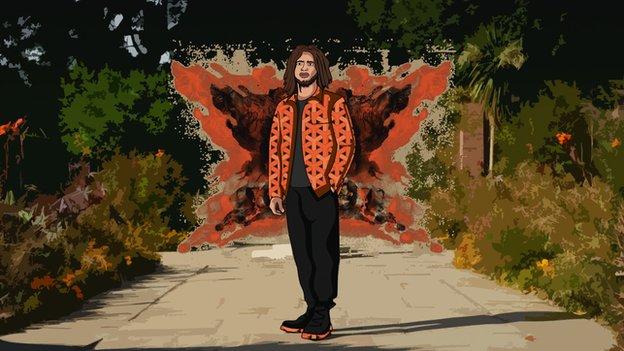 Hayden-Smith began to pick up plants from local nurseries and created a garden out of them - the Grenfell garden of peace.

"We kind of got the leftovers, but we thought that was a nice message, to be given a second lease of life," he says.

And that's how he got his new nickname - the 'Grenfell guerrilla gardener'.

"We made a massive statement in saying: 'Look - we don't need to rely on the authority to organise ourselves as a community.' It feels quite revolutionary because we're creating our own models and systems," he says.

"The way that people perceive gardening is like it's not a cool thing to do. I had to ask myself: 'What am I doing in a garden?' I'm usually on the green of a football pitch, not a garden. 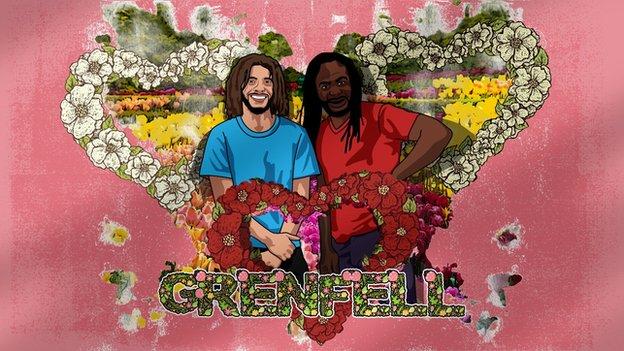 "A couple of the boys at football will message me on the sly, like: 'Yo Taysh, how do you grow tomatoes?'"

He wants to help change the perception that gardening is for elderly people.

"Chelsea Flower Show is 10 minutes from where I live and it's not relatable to me or anyone I know," he says. "But this year we're doing a garden there paying respect to the Mangrove Nine (black activists).

"I think gardening is a pretty cool thing to do. And everything I do is about legacy." 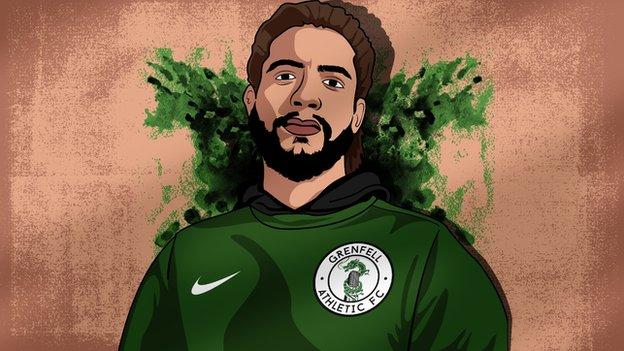 He has set up his own non-profit organisation called Grow2Know, which focuses on empowering and inspiring young people through horticulture, while making it more inclusive.

And he continues to play football - after nearly three years at Rising Ballers, he moved in December 2020. To Grenfell Athletic.