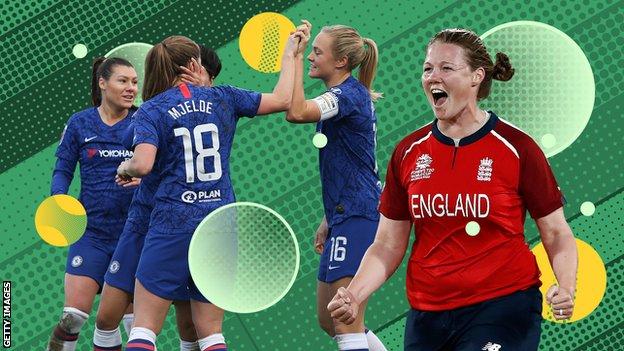 Chicken. Egg. TV audiences. Sponsors. Ticket sales... Cricket has heard all the arguments but signalled that equal prize money is a message that transcends the lot.

A BBC study shows that the overwhelming majority of sports offer an equal reward for at least one of their major events, but the biggest gulf is found in football.

Cricket has made some of the biggest strides since the 2017 study by offering male and female champions of The Hundred and Big Bash League the same prize.

Hockey and squash pay out equally, while tennis has been doing it for years at Grand Slams. None has regretted it.

"It's a collective fight across all sports, trying to narrow the gender inequality that exists," England cricket vice-captain Anya Shrubsole said.

England hockey captain Hollie Pearne-Webb added: "Football does need to look at sports like ours to see the opportunity."

So what can football learn about introducing equal prize money?

Equal prize money is not the same as equal pay

This is perhaps where the debate has sometimes seemed confusing - and made it easy to dismiss.

"I don't think we're at the stage for equal pay because if you look at the crowds the men have, and five-day Tests - all of those kind of things - they are going to get paid more," Shrubsole said.

"But when you have two identical tournaments running side by side, there's no excuse not to have equal money. I don't see how you can justify not having it when you have two groups of people who are doing exactly the same thing."

"With prize money it is more totemic. It's that real symbol, that gesture, of how much you value something," said Beth Barrett-Wild, who is in charge of the women's Hundred competition for the England and Wales Cricket Board (ECB).

"That message of equality really does transcend [commercial] things."

Pearne-Webb explains it as "that is just how society both inside and outside sport should be".

It is indisputable that market forces - supply and demand for ticket sales, sponsorship and TV deals - determine revenues for sports and therefore what they can spend on prize money, pay and investment in grassroots.

But it does not determine the order of a governing body's spending priorities.

Some sports have shown that prioritising equal prize money is having a positive knock-on effect in terms of bringing in more revenue, while sponsors increasingly want to be associated with an ethos of equality.

Squash's governing body, the Professional Squash Association (PSA), has seen its turnover increase 236.7% in the past five years since merging the men's and women's tours and introducing equal prize money at all its events.

"We have not cannibalised any of the men's prize money to subsidise the women's," PSA chief executive Alex Gough said.

"We set the level [of prize money at events] and we've been successful at attracting more tournaments, so the prize money has gone up that way. There is a bit more profile so our commercials have gone up and up much more considerably."

Participation numbers are up too and this has translated into a 36% increase in five years in the number of professional players. Those female players are earning 65.7% more than they were five years ago.

The ECB is hoping cricket will reap the same rewards, with Barrett-Wild saying: "The Hundred will really help to raise the profile of women's cricket and catapult women's cricket to a new and wider audience."

Since the last BBC study in 2017, hockey has introduced equal prize money in the Pro League and Euro Hockey League, while cliff diving has also levelled winnings in the Red Bull World Series.

"If you are competing well and you are in the top of the sport this is a really comfortable profession for young people to get into," British cliff diver Jess Macaulay said.

"That was a big draw for me, being able to make a substantial amount of money while doing what I love. Now it's equal, it's that much more of a draw for young women to get into the sport."

Shrubsole says equal prize money helps with players' motivation and a feeling of being valued.

"It gives you something big to work towards," she said. "But it goes from being a nice bonus to something that can really make a difference to someone's life - much more money you could put towards a deposit on a house or whatever it might be. That is huge."

You can't change everything overnight

While cricket has made much progress in recent years, there are still disparities in the biggest global events such as the Twenty20 and 50-over World Cups.

But they are narrowing substantially.

Australia won $1m ($716, 635) for their Women's T20 World Cup triumph last year and, while the International Cricket Council (ICC) has yet to confirm the prize money for the men's event in 2021, there are reports that it will be equal.

Fifa has said prize money will at least be doubled for the 2023 Women's World Cup.

But for those who argue that prize money should be linked to viewing figures that is still some way short since the Women's World Cup attracted a third of the audience of the men's last time with 1.12 billion viewers.

It can take decades to level things up. Tennis introduced equal prize money at the 1973 US Open but it took until 2007 for Wimbledon to become the fourth and final Grand Slam to do so, and there are still plenty of tournaments that do not pay the same despite the sport's reputation as one of the most gender equal.

Asked if the introduction of equal prize money in The Hundred could lead to the ICC following that example and introducing it at its global events, Barrett-Wild said: "Absolutely. The end goal for everybody in cricket has to be that we are all driving towards that equality and that gender-balance proposition for the sport."

It is, however, a lot easier to bring it in for a new tournament rather than one - such as many of football's - where there is a complex web of TV deals, sponsorship agreements and deep-rooted attitudes and expectations.

"The advantage we have with The Hundred is that we are launching it from the very start for men and women and we've had that almost blank piece of paper to be able to design it in that way," Barrett-Wild said. "It is probably more challenging if you are looking at historical professional sports competitions because they probably have more complicated commercial arrangements."

A new competition represents an opportunity to shake up deals on which women's matches are being shown on TV when, as well as set equal prize money from the off.

Pearne-Webb said: "People will watch it if it is on TV at the accessible times because there are just as many little girls out there as there are little boys. Boys get to watch the TV and go 'I want to be a footballer when I grow up', but a lot of girls don't because they don't see it. So football is missing out on such a huge opportunity."

Equal prize money is a 'no-brainer' for sponsors

A chance to be associated with a wholesome and relevant cause - why wouldn't a sponsor want that?

"In simplest terms, sponsorship is a demonstration of a brand in action and an investment in shared values - or at least the values that a business or brand can credibly aspire to," said Jonathan Izzard, sponsorship expert from Reckoner Strategy.

"In purely practical marketing terms, by being involved in a sponsorship like this - with perhaps your brand's investment making equal prize money a possibility - you have an active role in this positive change to talk about.

"Imagine being the brand that is able to go out with the message that you helped this happen.

"That's why equal prize money is such a no-brainer for sponsors."

What is football doing to narrow the gap?

The Women's Super League introduced prize money for the first time in the 2019-20 season, with Chelsea taking home £100,000 for winning the title. That same year Liverpool received £35.5m for their Premier League triumph.

"While we recognise there is currently a significant disparity between prize money for men's and women's competitions, these are determined by the amounts of money generated through commercial revenue, including national and international broadcast rights," an FA spokesperson said.

"The [men's] FA Cup is the biggest revenue producer for the FA. This revenue enables us to invest back into football at all levels and we have made significant progress to develop the women's game as a result."

Equal prize money is not necessarily increased prize money; it is simply offering the same amount.

"The more sports that do it the more pressure there will be on all these different governing bodies around the world, and people will be held accountable more for it," said Shrubsole. "That's the best way to keep pressing forward the issue."