Bayern Munich have made a 45m euro (£39m) offer for Napoli and Senegal centre-back Kalidou Koulibaly, 29. (Tuttomercatoweb, via Caught Offside)

AC Milan technical director Paolo Maldini wants to hold talks with Chelsea about the £26m option to turn 23-year-old England centre-back Fikayo Tomori's loan to the Serie A side into a permanent move as they feel it is "very high". (Sky Sports)

Real Madrid have joined Manchester City and Juventus in showing an interest in Sassuolo and Italy midfielder Manuel Locatelli, 23. (Calciomercato - in Italian)

Arsenal manager Mikel Arteta is on the shortlist of Barcelona presidential candidate Joan Laporta to take charge at the Nou Camp. (Mirror)

Is Gareth Bale back?

Mourinho on Bale - "Now he is better than ever."

Paul Lambert could be in line to take over as manager of Celtic after leaving his job at Ipswich Town by mutual consent. (Scotsman)

Liverpool manager Jurgen Klopp says Egypt forward Mohamed Salah "is a very important player" for the club and he hopes the 28-year-old "will be that for a very long time". (Liverpool Echo)

Everton manager Carlo Ancelotti says the Goodison Park outfit signed French midfielder Abdoulaye Doucoure, 28, from Watford on the back of a suggestion from the club's director of football, Marcel Brands. (Liverpool Echo)

Cardiff City boss Mick McCarthy is keen on signing Scottish striker Jordan Rhodes in the summer when the 31-year-old's contract runs out at Sheffield Wednesday. (Sun)

Carlisle get £10,000 every time Manchester United pick Dean Henderson, 23, as part of the deal the League Two club negotiated when they sold the English keeper to the Old Trafford club when he was 14. (Sun) 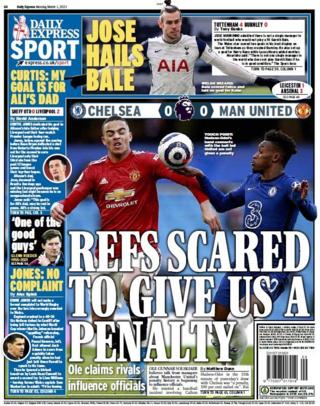