England goalkeeper Dean Henderson, 23, will seek to leave Manchester United in the summer if he is not installed as their first-choice next season. (Manchester Evening News)

Juventus and Inter Milan have joined the battle for Manchester City's 32-year-old Argentina striker Sergio Aguero, who has already spoken with Barcelona and Atletico Madrid about a possible move this summer. (Sun)

Paris St-Germain are ready to revive their interest in Arsenal's Hector Bellerin this summer, with the Spain full-back, 25, prepared to move and also thought to be a target for Barcelona. (CBS Sports)

Manchester United have refused to sanction a clause that would permit West Ham to automatically sign England midfielder Jesse Lingard, 28 for a set price at the end of the season. (Times - subscription required)

Mbappe wants to earn the same amount of money as Brazilian forward Neymar if he is to stay at Paris St-Germain. (Foot Mercato - in French)

Barcelona have intensified their interest in Real Sociedad's Sweden forward Alexander Isak, 21, as they look to bring in a new striker this summer. (ESPN)

Republic of Ireland full-back Matt Doherty faces an uncertain future at Tottenham with manager Jose Mourinho harbouring doubts over the 29-year-old's chances of succeeding at the club. (ESPN)

Chelsea coach Thomas Tuchel has admitted to trying to sign Uruguay forward Luis Suarez, 34, during his time in charge at Paris St-Germain, but is not considering the ex-Liverpool striker at Stamford Bridge. (London Evening Standard) 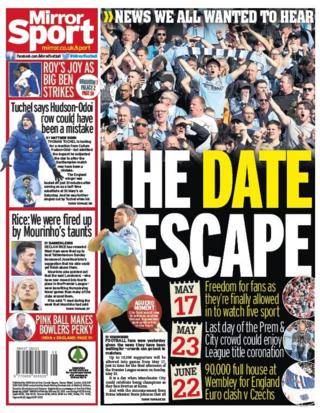