Arsenal look to be closing in on a deal to sign Sporting Lisbon's 18-year-old Portuguese striker Tiago Tomas in the summer. (Sun)

Arsenal have been told they can sign Celtic striker Odsonne Edouard, 23, for just £15m. (Express)

The agent of 21-year-old Lille defender Sven Botman, who has been linked with Liverpool, has denied the Dutch player has agreed a move to an unnamed club in the summer. (Voetbalzone, via Mirror)

Brazil defender David Luiz, 33, is set to be handed a fresh extension at Arsenal. (Independent)

Celtic are keen on a move for Burnley and Republic of Ireland midfielder Robbie Brady, 29. (Mirror)

Newcastle have been offered the chance to sign former Liverpool and Chelsea forward Daniel Sturridge. The 31-year-old has been without a club since leaving Trabzonspor. (90Min)

Chelsea manager Thomas Tuchel says there "would have been a chance" of him becoming Newcastle United manager if the club had approached him in 2015. (Times - subscription required)

Manchester United are set to extend back-up keeper Lee Grant's contract at the club, with the 38-year-old English player's current deal running out in the summer. (Star) 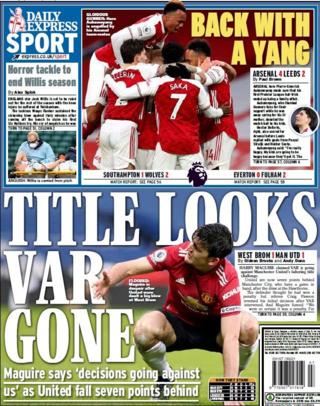