Tottenham Hotspur have made contact with Paris St-Germain's 32-year-oldArgentina midfielder Angel di Maria, who is available on a free transfer this summer. (L'Equipe via Talksport)

PSG still hope to sign Spurs and England midfielder Dele Alli, 24, on loan for the rest of the season. Spurs are considering Borussia Monchengladbach and Germany playmaker Florian Neuhaus, 23, as a replacement. (Mirror)

Alli wants to join his former boss Mauricio Pochettino at PSG, however Spurs will not let him leave until they have identified a replacement. (Goal)

New Chelsea manager Thomas Tuchel has RB Leipzig and France defender Dayot Upamecano, 22, at the top of his list of targets. (SportBild - in German)

However, United boss Ole Gunnar Solskjaer is not expecting any arrivals before the January transfer deadline. (Sky Sports)

Tottenham have been linked with a move for 29-year-old Napoli and Serbia centre-back Nikola Maksimovic, who is out of contract at the end of the season. (Spazio Napoli - in Italian)

Leicester City are increasingly hopeful of signing long-term target James Tarkowski from Burnley this summer. The 28-year-old England defender has 17 months left on his contract and is yet to recommit to the Clarets, who have previously rejected bids from the Foxes and West Ham.(Mirror)

The Eagles are prepared to offer Benteke a new deal at Selhurst Park to discourage clubs from making an offer. (Mail)

Chelsea left-back Baba Rahman is set to be the first player to leave since Lampard's exit, with the Ghana international, 26, poised to join Greek side PAOK Salonika on loan. (Sport24, via London.Football)

Manchester United and Manchester City are in a race to agree terms with 18-year-old Palmeiras forward Gabriel Veron. Both clubs are in negotiations with the Brazilian, with Barcelona unlikely to be able act on their interest. (Sport - in Spanish)

Arsenal are up against Barca for the signature of Manchester City's 21-year-old Spanish centre-back Eric Garcia, who is set to move as a free agent in the summer. (Mundo Deportivo, via Express)

Manchester United winger Facundo Pellistri is set to leave Old Trafford on loan.; Club Bruges and Alaves are interested in the 19-year-old Uruguayan, who joined the Red Devils from Penarol in October. (Goal)

Everton are in competition with Italian side Parma for the signature of 19-year-old Bayern Munich striker Joshua Zirkzee. Everton are thought to have offered to take the Netherlands youth international on loan with an option to buy set at more than £8.9m. (Sky Germany, via Sport Witness)

Celtic have stepped up their attempts to secure a pre-contract agreement with Preston North End defender Ben Davies, 25. (Lancashire Post)

AC Milan's Argentine defender Mateo Musacchio, 30, will have a medical on Wednesday before a move to Serie A rivals Lazio. (Calciomercato) 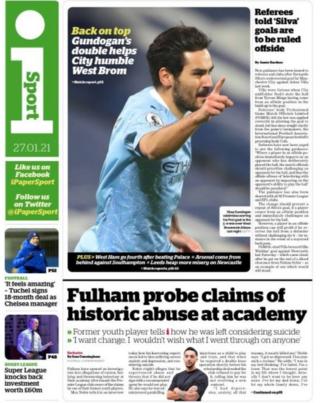 The back page of the i