Tottenham Hotspur are lining up a summer move for Southampton and England forward Danny Ings, 28. (Eurosport)

Ings wants to return to a Champions League club and is holding off on a new deal with the Saints.(Telegraph - subscription required)

Liverpool and Tottenham are looking into a possible deal for Inter's Italy midfielder Nicolo Barella, 23. (Calciomercato - in Italian)

Liverpool and Barcelona have not given up hope of signing Bayern Munich and Austria defender David Alaba, 28, despite Real Madrid being close to a deal. (Sport1 - in German)

AC Milan have agreed a deal to sign Chelsea and England defender Fikayo Tomori, 23, on an initial loan with a view to a permanent deal worth up to 30m euro (£26.6m). (Calciomercato - in Italian)

The modern great with an uncertain future

Why Ramos and Real are at a stand-off...

Tottenham and England midfielder Dele Alli, 24, is confident he will agree a loan move to Paris St-Germain in the January transfer window. (Sun)

Alli's hopes of a move rest on what demands Spurs place on PSG.(Goal)

Newcastle United defender Emil Krafth's £2.7m move to Istanbul Basaksehir has stalled after the 26-year-old Swede started for the Magpies against Arsenal on Monday. (Mail)

Bayer Leverkusen are in talks with Leicester City over a deal to sign English winger Demarai Gray, 24. (Sport1 - in German)

Arsenal have been told that 24-year-old Argentine midfielder Emiliano Buendia will not be leaving Norwich City during this transfer window. (Independent)

Manchester City have a £27.5m buy-back option on Aston Villa and Brazil midfielder Douglas Luiz which expires this summer, but Pep Guardiola is not expecting to pursue the 22-year-old. (Birmingham Mail)

Atletico Madrid want manager Diego Simeone to sign a new deal keeping him at the club until 2024. (AS - in Spanish)

Newcastle's American defender DeAndre Yedlin, 27, says he is in the dark over his future as the club have not instigated contract talks. (Newcastle Chronicle) 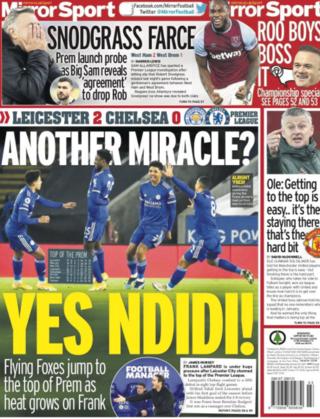 Leicester's win over Chelsea dominates the back pages