PSG expect a decision this week on their bid to sign Tottenham and England midfielder Dele Alli, 24. (Mirror)

Egypt forward Mohamed Salah, 28, is hinting he wants an improvement to his Liverpool contract, which runs until 2023, but the Reds have no plans to offer him a new deal at the moment. (Mail)

Real Madrid have agreed a deal to sign Bayern Munich's Austria defender David Alaba, 28, in the summer. (Marca - in Spanish)

Manchester United's 28-year-old England midfielder Jesse Lingard, who has been linked with clubs including Tottenham Hotspur, West Ham United, Marseille and Inter Milan, is keen to on a move but manager Ole Gunnar Solskjaer is reluctant to let him leave this month. (ESPN)

'Four or five teams could win it'

Arsenal would need to offer up to £50m to tempt Norwich City into selling Argentine midfielder Emiliano Buendia, 24. (Sky Sports)

Derby County have angered Manchester City by blocking their attempt to sign goalkeeper Scott Carson on a permanent deal. The Championship club want to collect a loan fee for the 35-year-old Englishman this month. (Mail)

Leicester City are ready to challenge Arsenal, Roma and AC Milan for the summer signing of 25-year-old Brazilian midfielder Otavio, who looks set to leave Portuguese side Porto when his contract runs out. (Leicester Mercury)

Galatasaray and Senegal striker Mbaye Diagne, 29, is on the list of strikers West Bromwich Albion are interested in signing this month. (Express & Star)

The Hammers have also made a bid for Sevilla's Morocco forward Youssef En-Nesyri, 23. (The Athletic - subscription required)

The future of Borussia Dortmund's England winger Jadon Sancho, 20, is unlikely to be resolved this month, but a move could materialise in the summer. (Sky Sports)

Inter Milan have agreed to sign Udinese's 26-year-old Argentina midfielder Rodrigo de Paul, who has been linked with Liverpool and Leeds United. (Tuttosport - in Italian)

Former Watford boss Vladimir Ivic is the frontrunner to take over as Sheffield Wednesday manager, although Doncaster Rovers' Darren Moore is also being considered. (Mail)

Several clubs are monitoring Chelsea's 19-year-old English midfielder Marcel Lewis, who is out of contract in the summer but has yet to agree extended terms. (Football Insider)

The Premier League will become the first competition to introduce permanent concussion substitutes for matches from the middle of next week. (Times - subscription required)

United have received interest from clubs about taking Wales midfielder Dylan Levitt, 20, and English centre-back Teden Mengi, 18, on loan until the end of the season. (Manchester Evening News)

LutonTown manager Nathan Jones says he would be keen to re-sign Brighton's former England Under-21s goalkeeper Christian Walton, 25, who spent a loan spell with the Hatters in the 2016-17 campaign. (The Argus)

Uefa chiefs are pushing ahead with plans to hold the climax of Euro 2020 at Wembley Stadium after being reassured by the scale of the UK's Covid-19 vaccination programme. (Times - subscription required) 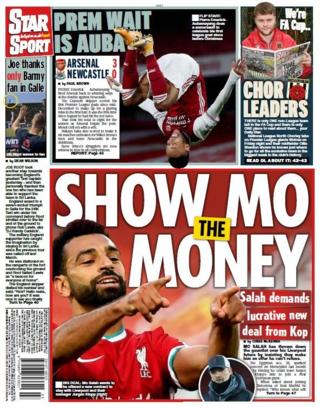