Juventus are lining up a move for Paul Pogba in the summer, when they believe Manchester United will have to lower their price for the France midfielder, 27, whose contract runs out in summer 2022. (Calciomercato, via Sunday Express)

West Ham United boss David Moyes says Chelsea and Manchester United have not contacted the Hammers about a move for England midfielder Declan Rice, 22. (Amazon, via Mail on Sunday)

Moyes also says West Ham have already made "big offers" for players but they have not been accepted. (Evening Standard)

Netherlands midfielder Georginio Wijnaldum's contract at Liverpool runs out in the summer and the 30-year-old will reject a new deal in order to fulfil his dream of joining Barcelona. (Sunday Mirror)

Aston Villa have opened talks with Marseille over a deal for 26-year-old French midfielder Morgan Sanson. (Mail on Sunday)

Why Nuno Espirito Santo is facing tough questions at Wolves.

Manchester City defender Eric Garcia, whose contract runs out in the summer, has been linked with Barcelona but a move for the Spaniard, 20, in January could be off after the Nou Camp club postponed their presidential elections until March. (Manchester Evening News)

Bournemouth could be ready to offer 29-year-old ex-Arsenal and England midfielder Jack Wilshere - who has been training with the Championship club after leaving West Ham - a contract. (Talksport)

Borussia Dortmund are looking at 21-year-old PSV Eindhoven forward Donyell Malen, who had a stint at Arsenal, as a replacement for winger Jadon Sancho, 20, if the England winger leaves. (Soccer News, via Daily Star on Sunday)

West Bromwich Albion have opened talks over a loan move for Celta Vigo and Turkey midfielder Okay Yokuslu, 26, as the Baggies aim to bring in three players during January. (Mail on Sunday)

Inter Milan's Argentina striker Lautaro Martinez, 23, who was linked with Barcelona in the summer, appears close to signing a new deal with the Italian club.(Sportweek, via Football Italia) 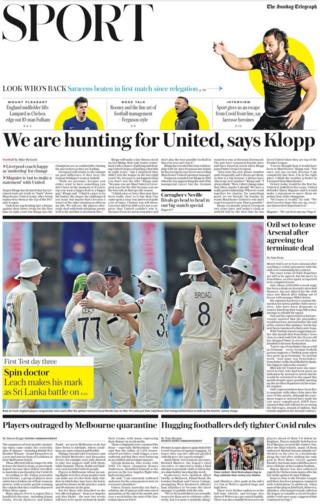