Paris St-Germain boss Mauricio Pochettino wants to sign Argentina forward Sergio Aguero on a free transfer in the summer when the 32-year-old's contract at Manchester City runs out. (Mirror)

Arsenal midfielder Mesut Ozil is in talks to join Turkish club Fenerbahce on loan for the rest of the season. However, the Gunners have said they do not want to pay any part of his £350,000-a-week salary if the move happens. (Guardian)

The Gunners are also being linked with a bid for 24-year-old Borussia Dortmund winger Julian Brandt this month, with the Bundesliga club willing to sell the Germany international. (Bild - in German)

Valencia have held talks with Tottenham over a move for England midfielder Harry Winks but are refusing to meet Spurs' asking price for the 24-year-old. (AS - in Spanish)

Atletico Madrid defender Kieran Trippier, 30, was keen on securing a January transfer to Manchester United, but the potential move has been scuppered by the England right-back's 10-week ban for breaching betting rules. (Talksport)

But Ancelotti is open to selling Italian striker Moise Kean to Paris St-Germain should the French champions want to turn the 20-year-old's loan deal into a permanent move. (Guardian)

Manchester United left-back Brandon Williams would like to move on loan to another Premier League club, with Newcastle United and Southampton having been linked with the 20-year-old Englishman. (Manchester Evening News)

Celtic are in talks with Leicester City about signing 23-year-old Croatian centre-back Filip Benkovic, who played for the Scottish champions on loan in 2018-19. (Sky Sports)

Championship side Cardiff City are not planning to try to sign Wales forward Tyler Roberts, 21, on loan from Leeds United this month. (Wales Online)

Newcastle's chances of taking Leicester midfielder Hamza Choudhury, 23, on loan have been reduced by Foxes boss Brendan Rodgers saying he is not "overly keen" on letting the former England Under-21 international leave on a temporary basis. (Newcastle Chronicle)

Bayern Munich are close to signing Reading left-back Omar Richards on a free transfer when the 22-year-old Englishman's contract with the Championship club runs out in the summer. (Sky Sports)

Napoli and Poland striker Arkadiusz Milik, who is out of contract in the summer and yet to play for the Serie A side this season, is wanted by the "best" Premier League clubs, says the 26-year-old's agent. (Sun) 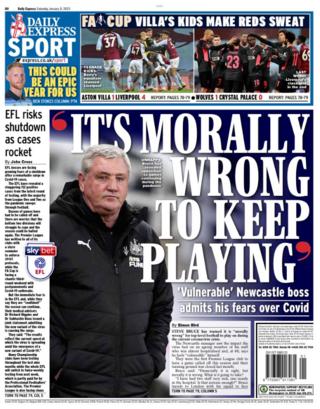 The back page of Saturday's Express