Manchester United are set to reward Portugal midfielder Bruno Fernandes, 26, with a new contract worth £200,000 a week - twice what he currently earns - in a bid to ward off interest from Barcelona and Real Madrid. (Sunday Mirror)

England midfielder Jesse Lingard, 27, is ready to ask Manchester United to let him leave in January, with reported interest from a number of Premier League sides, plus Scottish clubs Rangers and Celtic. (Team Talk)

However, Manchester United are set to extend Lingard's contract by another year - despite his continuing first-team absence. (Star on Sunday)

Inter Milan will open talks with former Everton and Manchester United forward Romelu Lukaku over a new contract amid interest in the 27-year-old Belgium striker from clubs including Juventus. (90 Min)

Former Liverpool and Manchester City striker Mario Balotelli is set to sign for Serie B club AC Monza on a deal until the end of the season. The 30-year-old Italian has been without a club since leaving Brescia after their relegation last term. (Sky Sports)

Paris St-Germain sporting director Leonardo says the club is making progress as they look to tie France striker Kylian Mbappe, 21, down to a new deal. (Goal)

Besiktas president Ahmet Nur Cebi says he would be keen to re-sign Everton's Turkey striker Cenk Tosun, 29, but has hinted his side would only be able to afford a loan deal. (Liverpool Echo)

Jose Mourinho says Tottenham "did not waste our time" attempting to sign Brazil midfielder Willian, 32, in the summer because Arsenal's wage offer was out of their reach. (London Evening Standard)

Tottenham defender Davinson Sanchez, 24, is being tracked by Italian side AC Milan after the Colombia international fell down Jose Mourinho's pecking order. (Sun on Sunday)

Real Madrid boss Zinedine Zidane has contacted Red Bull Salzburg's Hungary midfielder Dominik Szoboszlai in the hope of persuading the 20-year-old to sign for the Spanish club. (Bild, via AS)

Serie A side Bologna are considering a move for Wolves forward Patrick Cutrone, the 22-year-old Italian who is currently on loan at Fiorentina. (Il Resto del Carlino, via Sport Witness)

West Ham are among a number of clubs tracking the progress of English winger Marcus Edwards, 22, who plays for Portuguese side Vitoria Guimaraes. (Teamtalk)

Tottenham's FA Cup third-round tie at non-league Marine next month could be the first match to trial the use of digital health passports to allow more fans to attend. (Telegraph)

Newcastle's fixture against West Brom next Saturday is in the hands of "the medical people", according to Baggies boss Slaven Bilic. (Newcastle Chronicle) 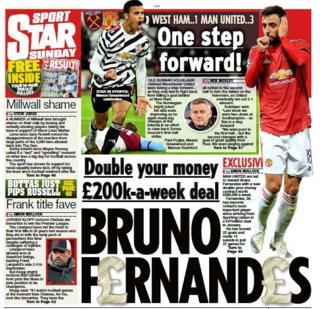