Arsenal and Liverpool are considering a move for Brighton and Mali midfielder Yves Bissouma, 24. (Talksport)

Chelsea's Germany defender Antonio Rudiger, 27, and England defender Fikayo Tomori, 22, could leave during the January transfer window. Rudiger has made one Premier League start this season, while Tomori is yet to start a top-flight game in 2020-21. (ESPN)

France striker Olivier Giroud, 34, says he wants to stay at Chelsea but that he needs to play more first-team football building up to the European Championship in the summer. (Telegraph - subscription required)

West Ham United are delaying formal contract talks with manager David Moyes and a number of players as they assess the financial implications of the coronavirus pandemic. (Mail)

The Hammers will sign Denmark Under-21 defender Frederik Alves Ibsen, 20, from Silkeborg for £1.2m in January. (Sky Sports)

Bamford returns to Stamford Bridge with point to prove...

Newcastle United want to sign Manchester United's England Under-21 defender Brandon Williams, 20, who has yet to start a Premier League game in 2020-21. (Star)

Barcelona have started talks with France forward Ousmane Dembele over a new deal, amid ongoing interest from Manchester United in the 23-year-old. (ESPN)

Tottenham boss Jose Mourinho, 57, believes he still has "15 to 20 years" left in his career, meaning he aims to be managing into his 70s. (i sport)

Meanwhile, Arsenal's Uruguay midfielder Lucas Torreira, 24, still has a future with the Gunners despite being loaned to Atletico Madrid, says Gilberto Silva, who won one Premier League title and two FA Cups with the Gunners. (Sun) 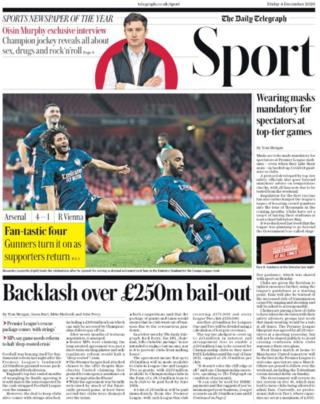