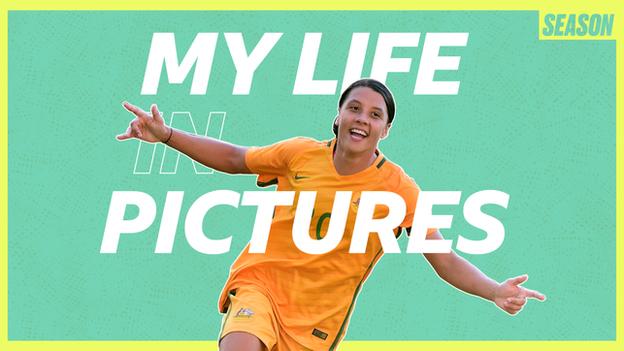 Chelsea and Matildas forward Sam Kerr is one of the best known women's footballers on the planet. Kerr, the all-time leading scorer in both the National Women's Soccer League (NWSL) in the USA and the Australian W-League, talks us through her life in five pictures.

I hated every second of football

I was a late bloomer so I didn't get into football until I was 12. I grew up playing Aussie rules but my mum and dad stopped me from playing after I started coming home with black eyes and a bloodied face. My cousin was playing football so I thought I'd try it - and I hated every second of it.

It wasn't until I was 15 and I got identified by the national team that I realised I was pretty good and could go somewhere. Up until that point I had just been playing with boys.

In football your life is so fast and so hectic that you don't really take time to slow down and notice massive achievements, like having my picture projected on the Sydney Opera House. The world has slowed down a bit because of Covid-19, so I've been able to enjoy the moment a bit more.

Erin [Cuthbert] is one of the best people I've ever met. I don't understand what she's saying half the time so we just talk gibberish to each other.

She's just always up for a laugh and has the same sense of humour as me. We're always up to no good, but in a funny way.

I can't really share with you guys what we get up to, but we're always joking around, at the back of the team bus laughing, we like to play a bit of Kesha, Ariana Grande, a bit of Pitbull, and just have a laugh.

She's recruited me to be a Rangers fan. We've met up a few times to watch them and now I find myself watching Rangers without her, she's made a fan out of me.

I watched Scotland qualify for the men's Euros and I was ready to be in Scotland partying. I'm riding that Scottish wave and that's who I'm going to be following at the Euros next year.

Anyone that knows me knows that I'm a huge family person. I come from a big family and I'm really close with them, especially my nan, who moved over with her family from India. She's old, 86 I think, but she acts young, she still goes for runs!

I've listened to my nan and my dad's stories about moving to Australia, feeling like outsiders, having to work their way into society at a time when it wasn't very multicultural, and it's taught me a lot.

It was hard for my dad to be accepted as a dark-skinned man in Australia. Listening to what they went through has really influenced who I am and taught me to accept people for who they are.

Recently I've noticed that I have a lot of people from India following me on Instagram. It's something that I've been thinking about a lot and I'd like to learn more about my heritage. I have the 2022 Asian Cup coming up with Australia and it's in India.

I've been speaking to my family about ways I could help be a role model for young Indian girls. My family's been in Australia 40 years now and I still don't know a whole lot about India. I'm really proud to be Indian and love my skin colour and love my "Indian complexion", as my Nana says.

There's something about that feeling of home that is so special

My dog Billie is the best, she's a boxer breed and she even has her own Instagram account. She's in Australia with my parents because it was just too difficult to get her over here. Whenever I go home to Perth my mum brings her to the airport, she sleeps next to my bed and we just spend every second together.

There's something about that feeling of home that is so special. When you get in the car and you know where you are and you bump into people you know. I find the lack of space in the UK really difficult, I'm used to open spaces. I love when I can wake up in the morning, go to the beach and go for a swim.

Whenever I'm home I feel at ease and relaxed.

People always say "what's the first thing you look at when you meet someone?" and for me it's sneakers.

My first pair of sneakers were some Jordans that my brother got me. They didn't fit me but I wore two pairs of socks and I used to roll around in these Jordans and I thought I was the hottest kid on the block.

My closet is all streetwear stuff. I'm not someone that needs to have all the big brands. For me there's two things, there's drip and there's flex. Flex is just having expensive stuff that is all big brands, but drip is how you wear it and how you make it look.

I'm a tomboy and you're not going to ever see me in tight clothes. I think it's a bit of the Aussie in me but it's also who I am. I don't care what people think, I don't dress to impress, I dress to feel comfortable. You can see that on the pitch, I wear an extra large shirt, I like that oversized relaxed fit.

I tie my hair to keep it out of my face, not for style. I hate hair, I hate the feeling of it and I hate hair on the ground, it drives me nuts. Everyone always laughs at me but I'm being dead serious!