Arsenal are monitoring their former academy player Yunus Musah, 17, with Everton, Leeds and Wolves also interested in the Valencia winger, who is a United States international. (90 min)

The Gunners are also interested in Sheffield United midfielder Sander Berge despite missing out on the Norwegian, 22, in January when he moved to Bramall Lane. (VG - in Norwegian)

Chelsea are already in talks with Brazilian defender Thiago Silva, 36, about extending his contract for another year until 2022. (Tuttomercato - in Italian)

Real Madrid have responded to Raphael Varane being linked to Manchester United by saying the France defender, 27, is "'untransferable". (Sun)

Arsenal are set for talks with Nicolas Pepe after his red card at Leeds on Sunday but are unlikely to loan out the Ivory Coast forward, 25, in January. (Times - subscription only)

The Gunners do not plan to make any move for 28-year-old Inter Milan midfielder Christian Eriksen. Borussia Dortmund and Paris St-Germain have also been linked with the Denmark international. (Star)

Former Manchester United midfielder Paul Scholes says "there have been a lot of players" that ex-Old Trafford boss Sir Alex Ferguson would not have signed as he questioned the club's transfer policy in recent times. (BT Sport, via Star)

Bayern Munich have decided not to offer Jerome Boateng, 32, a new contract when the Germany defender's current deal expires next summer. (Sport Bild - in German)

Inter Milan want to secure a contract renewal with Lautaro Martinez, 23, before the January transfer window after the Argentina striker attracted interest from Barcelona in the summer. (Sport)

Croatia midfielder Luka Modric, 35, is eager to stay at Real Madrid beyond the expiry of his contract next summer and retire with the Spanish giants. (Marca)

Real Madrid playmaker Isco, 28, wants to move from La Liga. The Spain international has previously been linked with the Premier League. (La Cadena SER - in Spanish)

Turkey midfielder Yusuf Yazici, 23, is looking to secure a big-money move from Lille after attracting interest from Arsenal. (Star)

Former Manchester City, Manchester United and West Ham striker Carlos Tevez, 36, is set to retire at Boca Juniors and the Argentine will then move into politics. (El Destape - in Spanish)

Ex-Barcelona president Joan Laporta is set to announce his candidature for the upcoming presidential elections at the Spanish giants. (Marca)

Plans are being drawn up to stage crowd pilots involving tens of thousands of spectators at Premier League stadiums in the new year. (Telegraph - subscription only) 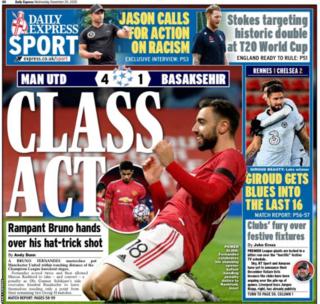