Tottenham and England striker Harry Kane, 27, was named by Manchester City boss Pep Guardiola as a player he wants the club to target during negotiations over his new contract extension. (Independent)

Manchester United goalkeeper Dean Henderson, 23, will pursue a loan move to enhance his England claims for next year's European Championships, with Leeds and Brighton linked with a January switch. (Sun)

France striker Olivier Giroud, 34, has admitted his lack of playing time at Chelsea is "worrying" and he will have to make a decision about his future in January. (Mirror)

Manchester United could be interested in a move for Eriksen. (Corriere dello Sport, via Star)

Chris Wilder, whose Sheffield United team are rooted to the foot of the Premier League table with only one point from nine matches, insists he does not fear the sack. (Sky Sports)

Arsenal have received a boost in their pursuit of Turkey midfielder Yusuf Yazici after his agent admitted a big-money move is a target for the Lille midfielder. The 23-year-old has been likened to out of favour Gunners midfielder Mesut Ozil, 32. (Mirror)

A cruciate ligament injury to Barcelona's Spain defender Gerard Pique, 33, could change how they approach their January search for a new centre-back. The Catalan giants have a long-term interest in Manchester City's Spain defender Eric Garcia, 19. (Manchester Evening News)

Pique will ask for a second opinion on his injury from Dr Ramon Cugat, a knee specialist in Barcelona. (Sport)

West Ham have been offered Real Madrid striker Mariano, 27, on loan in January, with an option to buy. (Corriere dello Sport - in Italian)

Rennes and France midfielder Eduardo Camavinga, 21, has been linked with a move to Tottenham and admits he would like a move to a big club, though is also happy to stay. (Football London)

France Under-21 midfielder Matteo Guendouzi, 21, on loan at Hertha Berlin, claims he has regained the confidence he lost under Mikel Arteta at Arsenal. (Telefoot, via Star)

West Ham and England midfielder Declan Rice has admitted being released by Chelsea as a 14-year-old benefitted him, both as a player and a person. (Football London)

Lyon are lining up moves for Leicester and Algeria striker Islam Slimani, 32, and Reims and Senegal forward Boulaye Dia, 24, as replacements for Netherlands forward Memphis Depay, 26. who is linked with Barcelona. (Le10Sport - in French) 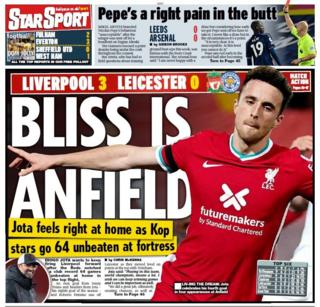