Liverpool defender Virgil van Dijk's hopes of returning this season have been boosted after the 29-year-old Dutchman returned to light training following his knee surgery. (Mail)

A number of Premier League clubs are interested in signing Spain defender Sergio Ramos, should the 34-year-old not renew his Real Madrid contract. (90min)

Real Madrid will move for Bayern Munich and Austria defender David Alaba, 28, regardless of whether Ramos leaves or not. (Marca)

Striker Olivier Giroud, 34, is ready to consider offers to leave Chelsea in January in a bid to keep his spot in France's squad for next summer's European Championships. (Guardian)

Newcastle United are ready to listen to offers for Paraguay midfielder Miguel Almiron, 26, who has already been offered to clubs by his agent. (90min)

Juventus' German midfielder Sami Khedira, 33, wants to move to the Premier League and could be an option for Everton or Manchester United. (Sun)

Nigerian billionaire Orji Kalu wants to buy a 35% stake in Arsenal and "bring trophies back" to the club. (Mirror)

Arsenal's Brazilian defender David Luiz, 33, was involved in a training ground scuffle with Dani Ceballos and struck the Spanish midfielder, 24, on the nose. (The Athletic - subscription required)

Norway striker Erling Braut Haaland, 20, wants to win trophies with Borussia Dortmund and is not thinking about a move abroad, says his father Alf-Inge Haaland. (Sport1, via Goal)

Juventus are in no rush to trigger their £31m purchase option to buy Spain forward Alvaro Morata, 28, from Atletico Madrid. (Goal) 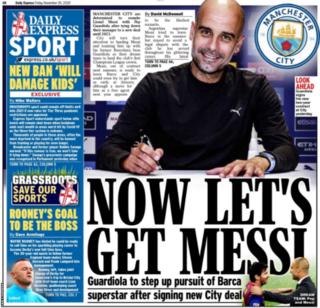