Liverpool and Manchester United have received a boost over the possible signing of RB Leipzig's 22-year-old France centre-backDayot Upamecano as a decision over his future will be made in January. Bayern Munich cannot afford to sign him. (Bild via Mirror)

Chelsea's Spain goalkeeper Kepa Arrizabalaga, 26, will go on loan and take a pay cut to help revive his career. (Sun)

Real Madrid will challenge Barcelona for the signing of Netherlands midfielder Georginio Wijnaldum, 30, from Liverpool. (Corriere Dello Sport via Sport)

Former Cameroon and Barcelona striker Samuel Eto'o, 39, is in talks with Spanish third division club Racing de Murcia with a view to a return to playing. Eto'o retired in September 2019. (Goal)

Barcelona's Argentina forward Lionel Messi, 33, has put Manchester City on alert before the January transfer window after saying he is "tired of always being the problem" at the Nou Camp. (Express)

West Ham's Brazil winger Felipe Anderson, 27, could return early from his loan with Porto if the Portuguese side are able to re-sign Brazil striker Hulk, 34, from Shanghai SIPG in January. (Record - in Portuguese)

Barcelona look unlikely to sign Spain defender Eric Garcia, 19, in January as Manchester City are not willing to reduce their valuation of 20m euros (£17.8m). (Marca)

Arsenal have agreed to sign Tunisia Under-21 defender Omar Rekik, 18, from Hertha Berlin in January - and loan him back to the German club. (Football London)

Eintracht Frankfurt's Dutch left-back Jetro Willems, 26, would be open to a move back to Newcastle United. Willems had his loan spell in the 2019-20 cut short by an anterior cruciate ligament injury. (Newcastle Chronicle)

Liverpool boss Jurgen Klopp has given eight academy prospects the chance to impress during training this week amid the club's injury crisis. (Mirror)

Eighteen-year-old France midfielder Eduardo Camavinga says he dreams of joining a "great club" but has not ruled out renewing his contract at Rennes. (AS)

Premier League managers have come together to get the five-substitute rule back on the agenda. (Mirror) 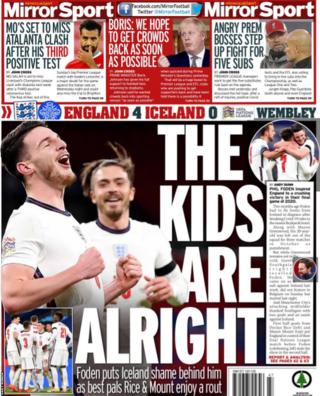