Barcelona presidential frontrunner Victor Font wants to bring Manchester City manager Pep Guardiola back to the club. Guardiola is into the final year of his contract at Etihad Stadium. (Sky Sports)

Manchester United are willing to double the wages of 26-year-old Turkey midfielder Hakan Calhanoglu, who is out of contract at AC Milan in the summer. (Todofichajes - in Spanish)

Liverpool are still interested in Napoli defender Kalidou Koulibaly and will make another bid for the Senegal international, 29, in January. (Calciomercato - in Italian)

Manchester United and Argentina goalkeeper Sergio Romero's proposed move to Inter Miami has fallen through. The 33-year-old will stay at United until January at least. (Mail)

England manager Gareth Southgate is ready to recall Manchester City midfielder Phil Foden, 20, after he was dropped for breaking coronavirus regulations in Iceland, but Manchester United forward Mason Greenwood, 19, may be left out. (Mirror)

West Ham forward Michail Antonio's hamstring injury is worse than feared and the 30-year-old will be sidelined for at least a month. (Talksport)

Liverpool midfielder Fabinho's hamstring injury is not as serious as first thought. The Brazil international, 27, will miss at least three matches. (Mirror)

Juventus will stick with manager Andre Pirlo, despite criticism in the Italian media of the club's start to the season. (Mail)

Everton forward Theo Walcott says he is keen to work more with Southampton boss Ralph Hasenhuttl on a more permanent basis. The 31-year-old former England international is on a season-long loan at Saints. (Liverpool Echo)

Manchester United legend Ryan Giggs says they could go up to 20 years without winning the Premier League title again. (Metro) 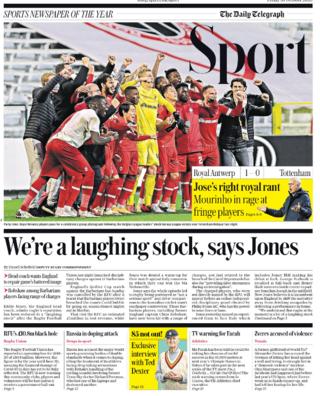 The back page of Friday's Daily Telegraph