Calhanoglu is due to discuss his future with Milan next month. (Mail)

Liverpool target David Alaba could be set for a move after talks with Bayern Munich collapsed. The Austrian defender, 28, is out of contract with Bayern at the end of the season. (Bild - in German)

Tottenham's hopes of agreeing a new contract with forward Son Heung-min, 28, have been boosted after the South Korean joined the same agency as manager Jose Mourinho. (Talksport)

However, Mourinho says that will have no influence on Son's ongoing contract talks. (Star)

English midfielder John Lundstram is set to leave Sheffield United after contract talks broke down. The 26-year-old has been linked with Burnley and Crystal Palace. (Sky Sports)

Barcelona's hopes of keeping Argentine forward Lionel Messi, 33, have been given a significant boost by Josep Maria Bartomeu's resignation as president. (Telegraph)

Arsenal and Germany defender Shkodran Mustafi says he has not discussed a new contract with the Premier League side. The 28-year-old's current deal ends in the summer. (Evening Standard)

Mustafi wants to extend his stay at Emirates Stadium despite reports he rejected a new contract in the summer. (Express)

Arsenal wanted to send English midfielder Reiss Nelson out on loan this season but the 20-year-old insisted on staying and fighting for a place in Mikel Arteta's team. (Independent)

Atletico Madrid are struggling to find a replacement for Ghana midfielder Thomas Partey, 27, following his move to Arsenal. Their target, Valencia's Central African Republic international Geoffrey Kondogbia, 27, could be out with injury beyond Atletico's extended deadline of 5 November. (Mundo Deportivo - in Spanish)

QPR hope winger Bright Osayi-Samuel, 22, will sign a new deal at the club despite interest from Celtic. (Standard) 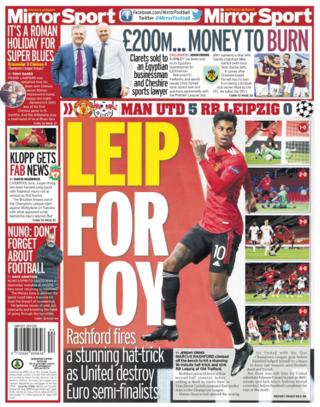