Liverpool are the latest club to scout Iceland Under-21s midfielder Isak Bergmann Johannesson, 17, who plays for IFK Norrkoping in Sweden. (Expressen - in Swedish)

Johannesson has also been watched by Manchester United and Juventus. (Aftonbladet - in Swedish)

Everton and England goalkeeper Jordan Pickford, 26, has hired bodyguards to protect him and his wife, as they were reportedly subjected to death threats after he injured Liverpool centre-back Virgil van Dijk in the recent Merseyside derby. (Mail)

Paris St-Germain forward Kylian Mbappe's proposed move to Real Madrid next summer is "done", according to Adil Rami, a former team-mate of the France international, 21. (RMC Sport, via Metro)

Argentine forward Lautaro Martinez, 23, says he "does not know" what will happen in the future but is currently happy at Inter Milan. (AS - in Spanish)

Manchester City's Algeria winger Riyad Mahrez, 29, is open to one day returning to France and joining boyhood club Marseille. (Canal Plus, via Sun)

Barcelona will attempted to sign PSV Eindhoven and the Netherlands striker Donyell Malen, 21, if they fail to complete a deal for Memphis Depay. (Mundo Deportivo - in Spanish)

Manchester United's 33-year-old Argentine goalkeeper Sergio Romero has been offered the chance to re-join Racing Club de Avellaneda, but he will need to take a major pay cut. (Star)

Championship side Birmingham City are among the clubs interested in signing former Brazil forward and free agent Alexandre Pato, 31. (Calciomercato - in Italian)

Leeds are planning to release Irish defender Conor Shaughnessy, 24, after he failed to secure a move away during the transfer window. (Football Insider) 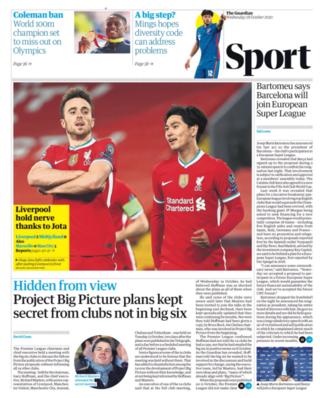 Wednesday's Guardian back page: Liverpool hold nerve thanks to Jota